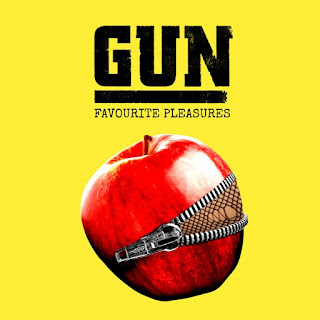 Note: The following is a PRESS RELEASE

GUN’s seventh studio album, Favourite Pleasures stands proudly alongside the very best of their work. Informed by a back-to-basics approach tempered by an innate sense for melody, the record was made in the band’s own Morse Code studios in Paisley. It’s an album that dances on a knife-edge, one that can turn on a single note from the raw pain of emotions hitting the rocks, to an unbridled celebration of hedonism.

From the pile-driving opener ‘She Knows’ to the infectious, glam-stomping of ‘Here’s Where I Am’, this is the GUN you know and love.

But there’s a new GUN here too – ‘The Boy Who Fooled The World’, resplendent in naked honesty, is a little-seen look at another side of the band as they go back to a time of innocent ambition, hungry to break out and seize the world, they don’t hold back.

The band will also be showcasing tracks from the album in 3 live dates in Glasgow, Manchester and London in December.

"We wanted to go back to our rockier roots and I think we’ve achieved that,” says frontman Dante Gizzi. “GUN will always have tons of melody – over the years that’s been instilled in us and it’s what we love, and we love playing those songs live – but I think with this one, we’ve become tougher. I’m also looking forward to playing Glasgow’s Barrowland, The Electric Ballroom in London and the Academy in Manchester – we have had great gigs at all these venues and it’s 2 years since we played the Barrowlands – a venue we were born to play."

Dante is also quick to offer credit where it’s due. “The introduction of new guitarist Tommy Gentry has added so much more to the band and to the sound, and it’s a welcome change,” he says. “This is the toughest album we’ve done in a while. It’s up there with ‘Swagger’ and ‘Taking On The World’.”

“These songs mean so much to us and now that they’re ready, we can’t wait for people to hear them and see them live.” he continued. “Of course, we’ll be playing the hits, but these songs stand up to those and then some.”

He’s not wrong. Across the album’s ten tracks are songs that encompass all that’s good and great about GUN – melodies, instantly memorable riffs and an unabashed, unrestrained desire to rock out. Of the title, and the title track, Dante said, with a glint of mischief in his eye, “The title was inspired by a friend of ours who was into S&M, big time, and it was a side of him that not many people knew about,” confides Dante. “He’d go on tour working with us and whatever his weekly per diem was, it would be spent in a day on hookers and sex shows the moment we hit Amsterdam and Hamburg and all those places.” He quickly added, “Those were his favourite pleasures… mine are a lot different from that.”

Listen to the first track on the album, She Knows.

The Deluxe edition (Pink cover rather than yellow) has 4 extra tracks: