Turn That Noise Down - Who's That Girl OST 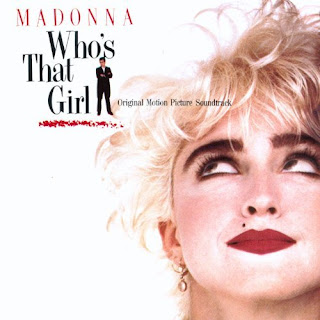 So many well-known albums turn 30 this year and Steve Taylor-Bryant and Susan Omand travel back to 1987 to revisit some of the sounds of their youth that made parents shout "Turn that noise down!" This week, Susan looks back at a film soundtrack and asks Who's That Girl...

Back in 1985 I wanted to be the Susan that everyone was seeking. OK, that’s not quite true, I wanted to look like Madonna looked in Desperately Seeking Susan, or at least to have that jacket. Thankfully I got over this phase very quickly once Madonna did her first style re-invention (although I still have a thing about jackets) but this minor Madonna madness explains why I actually know about the soundtrack to her 1987 follow-up film, Who’s That Girl, as I was keen to see how her next celluloid outing would fare after the success of Desperately. Don’t ask me what that film was about though because I honestly can’t remember it but I do remember the soundtrack.

Unusually for such a “star vehicle” film, her Madge-ness only features on 4 of the 9 songs on the soundtrack and they very much reflect her sound at the time, especially the hits of the title track and Causing a Commotion being reminiscent of her Papa Don’t Preach persona. Of her other two songs on the album, The Look of Love is, sadly, neither a cover of the ABC hit nor an updating of the Dusty Springfield but is an end-of-the-night school disco song that isn’t as good as Crazy For You was. And Can’t Stop is far more 80s Kylie than 80s Madonna in its manufactured popness.

The rest of the songs on the album are an interesting mix, with one from a band everyone has heard of, in the superb Scritti Politti, sounding exactly as Scritty and Politty they should, and Duncan Faure’s 24 Hours and Michael Davidson’s Turn it Up being somewhat filler-ish. Coati Mundi’s El Coco Loco reflects the mix of Latin American Rhythms with mainstream pop that is still hugely popular today (especially among Beliebers it seems). But my favourite track on the album has to be Step by Step by Club Nouveau. The trashy, meandery brass and jazz piano has tinges of Prince’s Bat Dance about it and I just love the low-down, smoky club feel. Sadly it was never released as a single, nor did it feature on any of their own albums but, listening back to it now, I know I need to invest in some more of Club Nouveau’s back catalogue.

So yeah, this is a soundtrack that people ignore because the film was so forgettable. But, 30 years on, there is still the odd gem if you go looking.