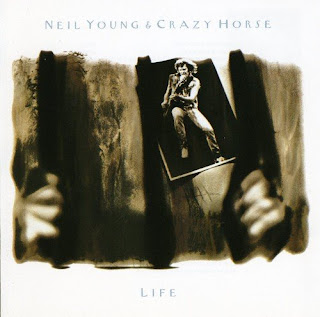 So many well-known albums turn 30 this year and Steve Taylor-Bryant and Susan Omand travel back to 1987 to revisit some of the sounds of their youth that made parents shout "Turn that noise down!" This week, Steve looks back at Life with Neil Young & Crazy Horse...

I love Neil Young, can't help myself. He sort of lost his way a bit in the mid-80's in my opinion, losing that Crazy Horse sound a little especially with Landing On Water, the predecessor to Life, but 1987 saw that edge return slightly and lyrically Young and the gang were as relevant and political as always.

Mideast Vacation opens the album and showed Young could look at the world with his critical eye as well as he has always done looking at North America. Long Walk Home is just a beautiful song, aching moments of harmonica and piano compliment the singing really well and Around The World is a great attempt to capture what had been done with Rocking in the Free world a few years before although the almost Bowie-esque mid 8 is massively out of place. Inca Queen shows Young's obsession with previous centuries where he thinks life was somehow better, not one of his tropes I ever bought into but still the reflective nature of the lyrics are worthy of a place on any album. Too Lonely is the kind of song that only really works because Neil Young & Crazy Horse are involved, lesser artists write Too Lonely and it's a generic tune but with Young at the helm it works. Prisoners of Rock 'n' Roll is typical raw rock, recorded live and feeling live. The reissued version early this century have it cleaned and digitised and I think it loses something as the original analogue recording feels dirty and I love that sound. Cryin' Eyes and When Your Lonely Heart Breaks are possibly the weakest songs on the album, they sound almost like they were written for 1987 radio play rather than just because Young had some material he wanted to do, weak and dated now but still worth a listen. The album finishes with We Never Danced and as a ballad it is glorious, Young hits notes that I'm not sure he could reach for nowadays and it just has a beautiful finished feel to it.

Life is not as dated as I thought it may be, with those exceptions towards the end, and fans of Neil Young, maybe not so much Crazy Horse, will enjoy everything about the album. For me the band aren't as prominent as they once were and some of the political songs lose something in their delivery for that reason but considering it's an 80's album made in a changing world by an artist who sometimes could be hit and miss it's still well worth having in your collection. Try and find an original recording though as the high resolution re-release from Geffen is actually worse for being modernised.