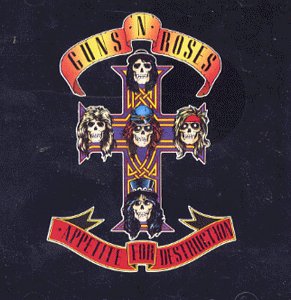 So many well-known albums turn 30 this year and Steve Taylor-Bryant and Susan Omand travel back to 1987 to revisit some of the sounds of their youth that made parents shout "Turn that noise down!" This week, Susan has an Appetite for Destruction...

Steve Taylor-Bryant is my best friend in the whole wide world but, ever since we’ve known each other, we have disagreed loud and long over Guns n Roses. No, Steve, Chinese Democracy is NOT the best album they have ever released! So what is?

The best Guns n Roses album EVER was released 30 years ago this month. Appetite for Destruction – what a debut! It set in stone (well, plastic) that unique GnR sound (that Steve still tries to convince me doesn’t exist (See?)) with the coming together of LA Guns with Hollywood Rose sparking the whole thing off, although they became more Rose than Guns by the time this album was released with only Duff McKagen of the album’s line-up never having played with Hollywood Rose (or LA Guns come to that).

So what of the album itself? Well, it says something that I’ve been listening to it pretty regularly for the last 30 years for a start. The music has never dated in my view, there is not a bad song on there and they all still stand up against today’s chart offerings. You will know ALL the songs, some maybe less than others granted, but you will have at least heard them at one time or another. From the opening iconic waterfall of a riff from Slash on Welcome to the Jungle, through the sublimely singable Sweet Child o Mine and the storming percussion in Paradise City, which always now reminds me of jumping through billboards on Burnout Paradise, these are the anthems that everyone knows and loves (yes they do, Steve). Mr Brownstone, the B side of Welcome to the Jungle but surprisingly never released as a single in the US on its own although it was in the UK, is also incredible, and has appeared on every set list in their live concerts. But my favourite on the album is probably My Michelle. Dark, heavy and not the ballad you expect it to be from the gorgeous guitar work at the start, it showcases the unique contribution of each member of the band beautifully and blasts the rock n roll side of the GnR sound better than anything else.