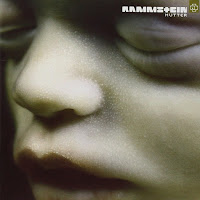 Steve Taylor-Bryant heads back to Germanic roots as he gets nominated to listen to Rammstein's Mutter to #SaveTheCulture...

Find out about #SaveTheCulture here.

I have a lot of time for Tony Cross, although I've never met my esteemed colleague in the flesh so to speak. We have been online pals for quite a while and share very similar interests. Tony loves history, as do I, art and theatre are a passion for us both and politically we are pretty in tune with each other, which is why I don't understand why I was so surprised when he sent me Rammstein Mutter for my segment of our #SaveTheCulture campaign. I was just expecting something else I guess but the German electronic metal band is what I got so here we go.

2001's Mutter is glorious! Being raised the son of a military man I had the good fortune to spend many years in Germany and, whilst I'm not as fluent in the language as I once was, I understand enough that the non English lyrics do not bother me as much as they may annoy others, the message is in the flawless musical arrangements. There are many categories in rock music and a simple google tells me Rammstein are Industrial Metal and that tag fits, I suppose, but I truly believe Mutter transcends any labelling. It has some typical heavy traits and sounds that sit within the industrial name but it also has utter power. Not just in its volume or its pacing, its drums and its guitars, it has power over the listener. I only had to listen once to write about it but two months later I'm still listening, still in awe, still learning.

Mein Herz Brennt opens the album well and Adios and Nebel close the collection remarkably but in between these three astonishing tracks are some real gems, some tunes that just hold you in your seat and demand that you listen to them. Rein Raus and the titular Mutter are very solid entries to an already strong track listing, Feuer Frei, which you'll all know from the XXX soundtrack, is immense and yet it's the one I consider the weakest inclusion, it's all about Sonne and Links 2,3,4 for me. If you get the chance to check out Mutter I urge you to do so, in the meantime at the bottom of this piece is the video for Sonne which is, as I said about the album at the top, glorious!

So to the next victim. I'm going to go back to my love of Billy Joel for my nomination and pick an album no one outside the true fans has ever heard of, Streetlife Serenade. With the exception of perhaps The Entertainer, it contains no world renowned hits or singles, just a great collection of songs. Since I was given some heavy metal I'll pick our own metalhead pisky, Romeo Kennedy, to tinkle these ivories.