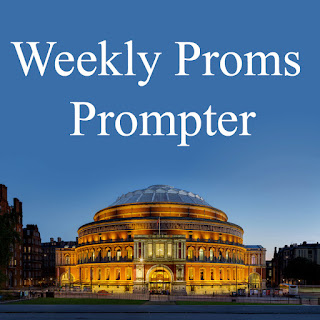 What’s coming up in week two of the 2017 Proms season? Susan Omand gives you some Proms Prompters...

Oh there’s so much on this coming week that I want to listen to, it’s going to be difficult to come up with just three to recommend for you. I’m fascinated by the idea of an orchestra performing Beethoven’s Eroica from memory and I want to see how technical or otherwise the lecture section of the prom gets. I also love the idea of the “taster plate” that is this year’s Ten Pieces presentation. And then there’s The Planets and The Young Person’s Guide to the Orchestra and an upcoming rant about why the songs of Scott Walker, although very good, should have no place in a season of orchestral music and...

But I think I’ve narrowed it down and it’s the three Proms later in the week. Wednesday sees a World premiere of a new piano concerto with a couple of vividly dramatic pieces from Liszt and one of my favourites with imagery-filled Mussorgsky’s Pictures at an Exhibition. The Russian theme continues on Thursday with the glorious and highly emotional Pathetique Symphony from Tchaikovsky (hopefully everyone claps after the 3rd movement as tradition dictates) preceded by something called The Immortal by Mark Simpson which, I must admit, has me completely intrigued as it is an oratorio inspired by Victorian seances.

And the Russian revolution continues on Friday with the beautiful Arabian Nights inspired Scheherezade from Rimsky-Korsakov (who my father insisted on calling “Ripped-‘is-corsets-off”... philistine!) Talking of Philistines, Homer’s Odyssey provides the inspiration for Anders Hillborg’s Sirens and the sea takes centre stage again with the short opener of Erich Korngold’s highly evocative overture for the Errol Flynn swashbuckler The Sea Hawk. As a comment I read said “before there was John Williams, there was Erich Korngold”.

The Aurora Orchestra is back, again performing a classic work from memory. This year, with the help of presenter Tom Service, they explore Beethoven’s ‘Eroica’ Symphony – the first Romantic symphony – in an event that’s part concert, part lecture.

Proms founder-conductor Sir Henry Wood is on a mission to find out what sparks musical inspiration. Join him to discover how nature, history, literature and art have all inspired composers to create musical masterpieces. Perfect for all the family.

Marking 50 years since the death of Malcolm Sargent, Sir Andrew Davis and the BBC SO recreate Sargent’s 500th Prom. With music by Elgar, Holst, Walton and Berlioz, as well as Schumann’s mercurial Piano Concerto, with Beatrice Rana as soloist.

John Wilson directs the BBC SSO in this all-English programme. Holst’s vividly atmospheric The Planets is set against the mellow loveliness of Vaughan Williams’s Symphony No. 9 – the last that the composer would write.

A celebration of the extraordinary career of Scott Walker, whose music has influenced artists from David Bowie to Leonard Cohen. Jules Buckley and the Heritage Orchestra pay tribute, with star guests including Jarvis Cocker and John Grant.

MUSSORGSKY – PICTURES AT AN EXHIBITION

Drama is at the heart of a Prom that moves from the psychological drama of Liszt’s Hamlet to the vivid portraits of Mussorgsky’s Pictures at an Exhibition. Plus Steven Osborne joins Ilan Volkov and the BBC SSO for a Julian Anderson world premiere.

Life and death collide in a Prom that explores what lies beyond human existence. Tchaikovsky’s passionate final symphony dares to face death with hope, while Mark Simpson’s critically acclaimed The Immortal takes inspiration from Victorian seances.

Pyotr Ilyich Tchaikovsky Symphony No 6 in B minor, 'Pathétique'(46 mins)

James Gaffigan and the BBC Symphony Orchestra take you on a journey from the exotic oceans of Rimsky-Korsakov’s Scheherazade to the Siren-filled waters of Homer’s Odyssey and the stormy seas of Korngold’s stirring film score for The Sea Hawk.