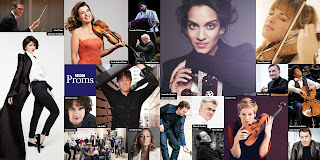 The First Night of the Proms is on TV tonight and Susan Omand looks forward to the season of 75 concerts to come...

The First Night of the Proms is a funny old bird with literally no Pomp and Circumstance (seasoned Promenaders will get this joke.) Instead of all the bobbing through speeded up sea shanties, sobbing through melancholic There’s No Place Like Home and the flag waving jingoism of Rule Britannia, there’s, well, nothing really to signify the start of what has become the largest annual classical music festival in the world since its inception 122 years ago. What you DO get though is an interesting and eclectic mix of music which sets us up for eight solid weeks of nightly concerts that promise to feature everything from Bach to Bartok and Walton to... wait a minute, what’s Tom Jones doing there?

Yes there seems to be quite a lot more “not classical” music this year and I don’t mean just veering into film scores or musicals either. I will have more to say on the subject in the weeks to come I’m sure but, for now, I’m going to steadfastly ignore the fact that the Proms is now home to the funky R & B sound of Stax Records et al.

So, with 74 OTHER proms concerts to look forward to, how will you know what to lend an ear to? Never fear, AlbieMedia will be here as I’ve compiled weekly “Proms Prompters” (you’ll find the first week’s worth here) with a full list of what’s on each week and my own three personal recommendations for things you might not otherwise consider listening to. I’ve also tried to note which ones will be shown on TV and when but all the Proms concerts will be live on Radio Three and livestreaming online in High Quality audio and everything should be available to pick up later on iPlayer, so there’s really no excuse to miss anything.

I’ll also do my best to review a few of the concerts over the coming 8 weeks and I do urge you to give at least some of them a go, even if you’re not a “classical music” buff, because there really will be something for everyone (even Tom Jones fans).

But that is all yet to come. Tonight is the First Night and here’s the line up (courtesy of the BBC Website) – The first half of the concert is live on BBC Four from 7:30 pm tonight and switches to BBC Two after the interval):

The 2017 BBC Proms opens with a dance and a shout. Celebrate John Adams’s 70th birthday with his masterpiece Harmonium. Award-winning pianist Igor Levit is the soloist in Beethoven’s ground-breaking Third Piano Concerto.