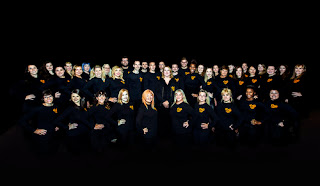 The Disney Voices Choir present their favourite Disney Classics in an evening of melody, fun and magic as part of the Brandenburg Choral Festival of London's Autumn Series in October...

Disney’s magic is bought to life through its rich catalogue of fantastic music, incredible instrumentals and spell-binding songs. The Walt Disney Company’s very own (and very good) employee choir, conducted by Emma Taylor, promise to take you on a tour of all the best loved songs from animated classics such as Pete’s Dragon, Beauty and the Beast and Aladdin to the most recent releases such as Tangled, Brave, Frozen and Moana. With fun facts along the way, discover the delights of Disney and join them for an enchanting night of entertainment!

The Brandenburg Choral Festival of London exists as a platform for amateur choirs to perform in Central London venues. It is London's biggest and broadest celebration of all things choral and they bring together choirs and vocal ensembles of different shapes and sizes, and from every musical background — classical and jazz, a capella or accompanied, gospel, male voice, choral scholars, community choirs, and a whole lot more besides! With two main seasons each year — the Spring Series and the Autumn Series — Brandenburg presents over a hundred concerts of unparalleled variety.

NB: All arrangements of the songs above for Disney Voices Choir by Emma Taylor