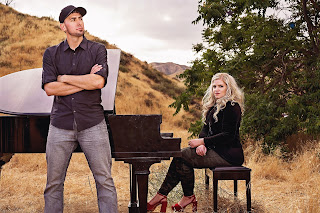 Titled in reference to the compassion and unity felt across America the day after the infamous terrorist attacks, the video is set on a battleground of golden prairie grass in rural Santa Clarita, California. It not only features J.ournal intricately weaving his poetic narrative while Thomas deftly renders her composition on a grand piano, but also an orchestra and a full cast of civilian soldiers that transform into contemporary dancers in a dazzling, heart-wrenchingly glorious final stanza. (You can watch a fascinating "behind the scenes" of everything that went into making the short film here.)

"We don't have to be the same to be one. Our goal, by invoking the emotions of compassion and unity felt in the days after 9/11 is to help us all remember the things we have in common instead of focusing so much on our differences. The video further brings this concept to life by juxtaposing the desperation of Saving Private Ryan with the exultation of La La Land."

Mission accomplished. The result is a stirring symphony of poetry, piano, and performance that resonates deeply in a perilous political climate.


J.ournal is a spoken word poet who infuses his poetry with music of various genres to create soundscapes for what he calls "video poems." His topics vary from philosophy to nostalgia, from "Rocky" allegories to social commentaries. His videos have been viewed over 13 million times online.

Jennifer Thomas is a classically trained pianist, violinist, composer and recording artist. She was named Classical Crossover UK's Top Female Artist of the Year, won The Indie Award, Top 20 Editorial Pick of 2012, Album of the Year and Artist of the Year at the 2013 IMC Awards, as well won Best Original Score for Documentary/Short Film at the 2012 Hollywood Music in Media Awards. Her music has been featured on television and film networks such as NBC, CBS, Universal Sports, and MGM.