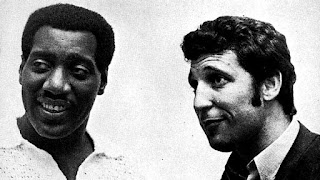 Celebrating the 50th anniversary of the Stax/Volt Revue’s first tour of the UK, Booker T. Jones and Sam Moore, both of whom were part of the 1967 tour, will join Stax artists William Bell, Steve Cropper and Eddie Floyd in a concert underpinned by Jools Holland And His Rhythm And Blues Orchestra on Friday 1st September as part of this years BBC Proms concerts.

Performing tracks such as (Sittin’ On) The Dock Of The Bay, Soul Man (marking 50 years since its release) and Private Number, they come together to pay tribute to the Memphis-based record label, founded in 1957 and synonymous with Southern Soul - a distinctive blend of funk, gospel and R & B championed by the likes of Otis Redding, Rufus Thomas and the Staple Singers.

As for every Prom, around 1,000 Promming (standing) tickets will be made available on the day of the concert, priced just £6, and available to buy in person from the Royal Albert Hall (with a limited number available online between 9am-noon). Advance tickets are sold out (returns only). The concert will be broadcast at 10.15pm on Friday 1 September on BBC Radio 3 and BBC Four and on BBC Radio 2 on Friday 15 September at 8pm.

The 2017 BBC Proms begins on Friday 14 July and runs until Saturday 9 September, presenting over eight weeks of world-class music making from a vast array of leading orchestras, conductors and soloists from the UK and around the world. Visit the BBC Proms website for full information about the season.

Jools Holland says: “Over the years on my TV shows it’s always been a personal joy and honour to welcome some of the great artists who started with Stax. Now I’m over the moon because the visionary bigwigs at the BBC have seen fit to give us a Prom at the Royal Albert Hall celebrating Stax music. I have invited British greats Sir Tom Jones, Beverley Knight, James Morrison and Ruby Turner to join me and my Orchestra and most importantly some of the legendary surviving Stax artists who are old friends. Please join us on the BBC for an evening of some of the greatest music to have made it out of Memphis.”

Booker T. Jones was “so happy to celebrate the 50th Anniversary of Stax's European Tour with good friends! The music onstage will tell the wonderful story!” And Sam Moore added "I never imagined I'd be coming across the pond to celebrate the 50th Anniversary of one of the most exciting times in my life, the 1967 Stax/Volt Tour. The love and enthusiasm from the British audiences back then was like nothing any of us had ever experienced before. Performing at the Proms now at Royal Albert Hall with some of those we'd influenced is spectacular. I just wish that Otis, Arthur, Al, Duck, Wayne, Andrew and Dave were here to celebrate with us... Maybe they're all looking down and patting their feet to the beat."