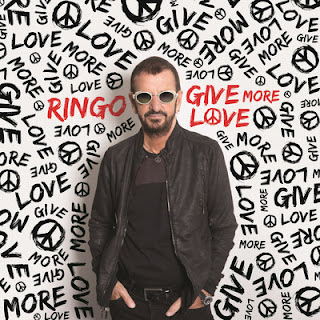 Ringo Starr has revealed details of his 19th solo album, Give More Love, which will be released this autumn...

Starr said of the collaboration with his ex-Beatle buddy, ""Well we are still mates. He's out on the road, he's got his own life, I'm out on the road a lot making records and he was in town so I called him and I said 'I've got this track for you to play on'. I just love him but I love the way he plays."

Give More Love also has four bonus tracks: Back Off Boogaloo, You Can't Fight Lightning, Photographand Don't Pass Me By. This version of Back Off Booglaloo is based on the original recording Ringo made when he wrote the song. He recently discovered the tape when he moved houses. The other three bonus tracks are collaborations based on performances from Starr's 2016 Peace & Love Birthday event. Alberta Cross performed You Can't Fight Lightning and Vandaveer performed Photograph and Don't Pass Me By. Starr loved their renditions and asked them to each record them for his new album, also adding his own vocals.

Give More Love will be released by UMe on digital and CD formats on September 15, 2017, with vinyl to follow on September 22, 2017