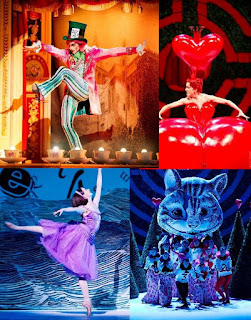 Wheeldon's Wonderland: Alice's Adventures return to the Royal Opera House to open the 2017/18 Season in September...

The Royal Ballet opens the 2017/18 season with Christopher Wheeldon's critically acclaimed production of Alice's Adventures in Wonderland. Since its premiere in 2011, the ballet has become a firm favourite with audiences of all ages, featuring an array of colourful characters, vivid stage effects and imaginative choreography. The ballet is set to Joby Talbot's multi-layered score and Bob Crowley's sumptuous designs with lighting by Natasha Katz.

Royal Ballet dancers Lauren Cuthbertson, Francesca Hayward, Sarah Lamb, Beatriz Stix-Brunell and Yuhui Choe dance the role of Alice with Steven McRae reprising his role as the tap dancing Mad Hatter. Akane Takada will make her debut as Alice during this month long run of performances, with Alexander Campbell and Matthew Ball also debuting in the role of the Knave of Hearts.

Here's a look at some of the choreography from a previous production.