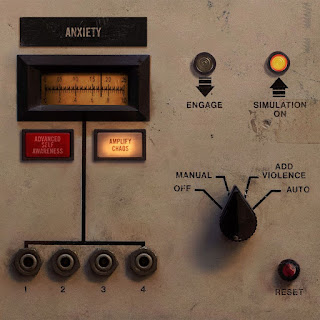 After their recent Twins Peaks appearance, Nine Inch Nails announce their next EP, Add Violence. Listen to the first track...

In June, Nine Inch Nails’ frontman Trent Reznor revealed that Not The Actual Events (read Reece's review of that here) was the first of a trilogy of EPs, of which Add Violence has now been revealed as the second instalment. As the official website explains:

Add Violence finds Nine Inch Nails becoming more accessible and impenetrable at the same time. The sonic palette expands significantly from not the actual events, incorporating elements of beauty into the dark dissonance. The narrative arc linking the three records begins to emerge through the disassociated lyrics and the provocative and clue-filled cover artwork and accompanying physical component, available exclusively through the nin.com store.

The “physical component” this time remains a mystery for now and, since the Not The Actual Events EP came with some incredibly messy black powder, we hate to think what it could be, although we’re putting down newspaper just in case.

However, they HAVE released the first track from the EP, Less Than, on YouTube while we cover up.

Add Violence is available on Digital Download from this Friday with the CD coming September 1st and the vinyl announced soon.