Turn That Noise Down - Marillion 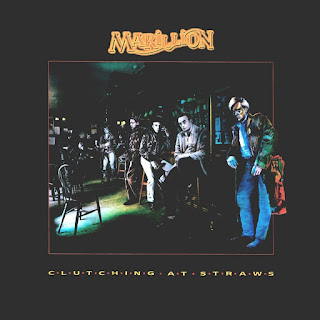 So many well-known albums turn 30 this year and Steve Taylor-Bryant and Susan Omand travel back to 1987 to revisit some of the sounds of their youth that made parents shout "Turn that noise down!" This week, Susan Omand remembers Clutching At Straws with Marillion...

Ahhh Marillion. The Sil-marillion (yes that’s where the name came from). Or, more particularly, Fish. This band and that singer are definitely in the “a time and a place” nostalgia slot for me as they provided the soundtrack to a year that meant a lot to me with the albums Script for a Jester’s Tear, Fugazi and Misplaced Childhood (my personal favourite album of theirs). Clutching at Straws was a couple of years later and the final studio album with Fish as the band’s singer/songwriter. And, to be honest, it was also the final Marillion album I bought, purely for that reason. So I realised that nostalgia was going to play a huge part in my relisten for the album’s 30th anniversary.

As I put the record (yes, vinyl) on though and that guitar/synth shimmering intro to Hotel Hobbies percolated through the speakers, rising and falling through the story of the songs on the album until the final manic laughter of Happy Ending, I was immediately transported back in time and the hairs on the back of my neck stood up. This was not just about nostalgia. These guys are actually really really good. I still love Fish’s voice which can go from softly lyrical to powerful protest in a single phrase, as can his songwriting. This is a concept album with the main character, a descendant of the Jester, sitting in the pub, in hotel rooms, on the street, drinking to forget or, at least, numb the pain of his failed life. The irony of Happy Ending is not lost. There are also references to several of Fish’s heroes throughout the album, and on the cover art, with the likes of Robert Burns, Lenny Bruce and Jack Kerouac giving an idea of the eclectic background his lyricism comes from.

The tracks themselves demand to be the sole (soul?) focus of your attention because of the lyrics but that doesn’t mean they’re not great music for the sake of it. The melodies are beautifully picked out by keyboard and bass with percussion and screaming lead guitar used for chorus break emphasis. Although it isn’t, the album feels almost orchestral in that regard and I do find myself conducting bits as the instruments kick in. One of my top 3 Marillion tracks is on the album (the others are on Misplaced Childhood) with Incommunicado, one of three singles from the album along with Warm Wet Circles and the beautifully lyrical Sugar Mice. But the lesser known tracks are just as good; Hotel Hobbies is in my top 5 of theirs and Torch Song gives the story of the concept album’s character in a nutshell.

Is there a weak track on the album? Not for me, although I can see that the whole album, indeed that era of Marillion, may not be for everyone as it has a very definite sound. And that sound was the words and voice of Fish.