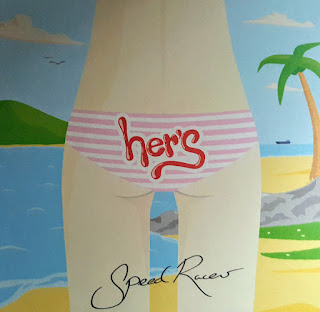 Neil Gardner is a bit of an audio guru, being the brains behind an award winning spoken word production company. But sometimes he likes to retreat from the digital studio to listen to some music analogue style, on vinyl. This time it's a single from Her's...

Side A: 50s beat pop vibes slathered with Smith’s style guitar and vocals. Insistent rhythmic indulgence that throws hand claps and sweeping tones into the mix. Uplifting yet oddly melancholic pop that tingles and fizzes whilst keeping you thinking.

Side B: Dream-dirge vocals artfully playing with a warm bassline and tantalisingly playful rhythm guitar. Smiths in form and function but this is no rip off but a cleverly crafted continuation of Morrissey and Marr’s art. Some truly beautiful picked lead guitar entrances in a perfect example of the use of stereo panning. A lovely piece of melodious pop.

Finyl thought: makes one long for the daffodils and tenements and 1p chews