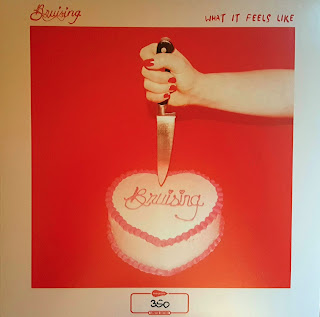 Neil Gardner is a bit of an audio guru, being the brains behind an award winning spoken word production company. But sometimes he likes to retreat from the digital studio to listen to some music analogue style, on vinyl. This time it's a single from Bruising called What It Feels Like...

It’s back to early 90s angst with grungy bass underlying a soft female vocal and layered with steely guitar. Reminiscent of Weezer and Eels but in no bad way. Short sweet and full of life, Bruising have created a track that wouldn’t​ feel out of place on the Empire Records soundtrack or any of Kevin Smith’s early films.

Finyl Thought: time to dig out the old droopy cardigan and floppy hair wig and watch some Teachers on DVD