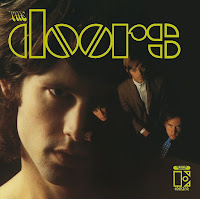 Re-opening the door to #SaveTheCulture, Tony Cross listens to The Doors, The Doors...

Find out about #SaveTheCulture here.


When I realised that this was the album I was going to have to listen to I felt a weird mixture of disappointment and nostalgia. Once upon a time I shared a house with a Doors obsessive. He was so obsessive that he even bought books of Jim Morrison’s terribly pompous poetry. And his obsession rubbed off on me a little.

I read Danny Sugarman’s ‘No One Gets Out of Here Alive’, which made me realise that for all Morrison’s creative drive he must have been a pain in the arse to live with but I could see what appealed to people about him. I even watched the utterly awful Door movie directed by Oliver Stone, which helped build up that Morrison myth.

Truth is though Morrison wasn’t an easy person to live with who wrote terrible poetry but when his words were combined with music something impressive was created. The Doors is their debut album and has to be one of the great debuts, although not quite as kick arse as Guns ‘n’ Roses first album which gets my vote as the actual best first album ever. I digress.

We begin with Break On Through drives along at breakneck speed. A little more rawness and – like The Monkees, (I’m Not Your) Steppin’ Stone – you're skating close to punk rock. It’s a great song. We then slide into the more louche Soul Kitchen. It’s at this point you really start to notice how important Ray Manzarek’s keyboards and John Densmore’s driving drums are to The Doors. Morrison’s vocals, which can be smooth as silk can cut up rough when needed. This song makes me think of last orders in Lancaster pubs and a return to our house for further shenanigans (or toast and tea, whichever came first.)

The next track is The Crystal Ship, which again drifts along deceptively. Morrison’s doing his most chilled out angelic vocal whilst Manzarek’s there again. Doing his impressive keyboard thing. It’s the keyboards that I think make The Doors distinctive. Well, that and Morrison’s vocals. Twentieth Century Fox is a hymn to a woman and frankly is as bog standard a Sixties record as it could possibly be. With a slight variation, it could have been done by any Sixties band. Its kindred spirits are songs like ‘American Woman’ by Guess Who or Jimi Hendrix’s ‘Foxy Lady’

Weirdly the next song, Alabama Song (Whisky Bar), is basically a sing-a-long drinking song. I’m not sure if you’d get away with ‘O show me to the next little girl’ as a lyric in the modern music but despite this there’s something fun about this one. It’s as if no one had heard the rest of the album and decided to throw this one on for the shear hell of it.

Then we reach probably – just – the most famous song on the album, ‘Light My Fire’, which rolls of a Manzerak keyboard intro into Morrison’s vocal. It’s a good song, but I’ve got a soft spot for José Feliciano’s chilled out version, which Will Young ‘borrowed’ almost unremarked upon decades later. It’s a sixties version of Marvell’s ‘To His Coy Mistress’: let’s get on with what we’ve got to get on with because there ain’t much time.

‘Back Door Man’ is next. Weirdly, I really like this song even though it sounds as ugly and creepy as all hell. I mean this is Radiohead’s Creep but with an American arrogance or am I now seeing comparisons where none exist? Who knows? Who. Knows.

By now we’ve reached track eight, ‘I Looked At You’, which is all spirally keyboards and hippy-dippy stuff and the track I totally forget about every time I listen to it. It’s the one I think with the most in common with the British invasion. You can imagine Herman’s Hermits doing a jaunty version of this on some sixties TV programme. It’s here, it’s gone and it’s forgotten. Pfft.

‘End of the Night’ I like. It’s another of The Doors songs that you can’t imagine anyone else doing. You feel their trying to do something different and Morrison’s vocal is like a sinister club singer. This is the David Lynch song: something that escaped from the Twin Peaks soundtrack. It gets under your skin.

‘Take It As It Comes’ is, like, ‘I Looked At You’ a pretty standard sixties pop song saved only by Manzerak’s keyboards and a stonking bass line. Still as soon as we’re out of here we’re into ‘The End’, which is the track on the album that as soon as the guitars begins noodling away transports you back to a time of Vietnam. It’s a dark time in American history the late-sixties. It’s a time of doubt. It’s the beginning of the end of faith in the American government. If World War One broke the dreams of the European progress then the jungles and cities of Vietnam did the same to America. Her faith in her government started to fray, the generation gap became a chasm and the road to Donald Trump began. ‘The End’ is the stoned, crazy dream of a privileged white man who couldn’t see a place for himself in modern America. It’s a man looking for answers. It’s also notoriously oedipal. It seems deadly serious. It’s genuinely disturbing too. For me it is the best track on the album and for all its pretensions – says the man who has just written this nonsense – it feels like part of a longer tradition.

So, there you have it. My thoughts on The Doors. To write this I listened to the album dozens of times. I got bored of some of it. I forgot bits of it every time but I never failed to get lost in ‘The End’. What I do carry away with me now though is three things: Manzerak’s keyboards are key to the sound of the whole thing, there’s a driving rhythm that gets under your skin on the best tracks and everyone should probably listen to this album at least once.

I suspect Jim Morrison was a difficult man to like but if it was my place to forgive him, I’d forgive him for ‘The End’.

This column goes out to those of us that lived at 9, Green St in Lancaster and Mr. John Watson of PG28 and Phil O’Shaughnessy of OG28 because this album will always remind me of Lancaster, field trips to the Netherlands and realising that there were things that even I thought were pretentious.

For the next #SaveTheCulture, I nominate that Steve Taylor-Bryant is going to listen to some Germanic metal with Rammstein's Mutter. The reason I suggested Rammstein was because it was the album that the 18 year old me was least likely to ever listen to until I met John Watson with whom I shared a room at university. (He gets a mention in the paragraph above.) Watson opened my mind to a whole different musical universe and many years later on a visit to Prague he introduced me to Rammstein (via a Czech music channel). I never would have listened to it at all if it hadn’t been for a trip to Prague but I loved it even though I couldn’t understand it. It led me to seeing them live on my own, which I think John Watson considers as the completion of his mission so I thought it only fair to pass on the musical karma.