Wheatus have just finished their hugely successful 2017 tour and our own middle-aged dirtbag VentSpleen went to watch them live in concert on the final UK date of the tour...

"So what did you do last night? Oh, I hung out with Wheatus and saw them perform live"

You know when you have one of those conversations about bands that you really loved when you were younger? Yes you do! It normally goes something like this. "Oh you know who (insert band name) were! They had a massive hit with (insert song name) and (insert another song name)" You will normally get the following as a response "oh yeah, wow I really liked them, I wonder what ever happened to them" Chances are in one of these sort of conversations you will have discussed Wheatus as they had a massive hit in the 2000's ( I refuse to refer to that decade as the Noughties cos it sounds stupid) with "Teenage Dirtbag" which was followed by a stupendous cover of "A Little Respect" and the equally anthemic "Wannabe Gangster" I have to be completely honest that, after the bands astounding second album (Hand Over Your Loved Ones) I lost touch with Wheatus. But Brendan Brown's instantly recognisable vocals and the guitar driven, percussive Wheatus sound was something that I never forgot. Teenage Dirtbag was a constant on my stereo for the longest amount of time and it achieves the status of being a song that is completely timeless.

So we move forward to 2016 and my friendship and PR work with Indie Film director Crazy D Lane leads me back to Wheatus, as they are not only providing the theme song for Invasion Of The Not Quite Dead but he is producing a documentary on the band themselves. My heart leaps as I rekindle my love of a band that I had not so much forgotten but consigned to my musical past. It seems that Brendan has been flying the Wheatus flag for all those years and that I would have an opportunity to see the band perform on the last night of their 2017 UK tour. So on a typical summers night (it was raining a lot) I find myself at The Forum, RRRRRRRoyal Tunbridge Wells to hear Wheatus play live. This is a review of that evening and may contain fan boying.

Before I get to Wheatus though I have to say that Mike Doughty was phenomenal with his, Wheatus backed, support act a masterclass in musical showmanship. Doughty's style is really difficult to describe with its acoustic, electro, decks and effects edge in know way over powering Doughty's vocal talents. Check this man out he is amazing! It was also a wonderful experience to witness Brendan providing lead guitar duties and is really a testament to Brown's creative passion and complete absence of ego or (as I like to call it) the 'dont you know who I am ' syndrome. After a short break it was time for Wheatus to take main stage and the Forum audience were more than ready. 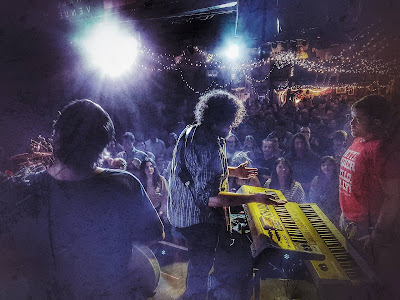 What struck me, right from the outset, is that a Wheatus gig is unlike any I've been to before. Brendan hands the control right to the audience and gets them to tell the band what they want to play. As a musician myself this really impressed as the band effortlessly moved from song to song and were never once thrown by sudden keys programming or change of riff etc. It wasn't at all chaotic despite audience participation being at the heart of the set and the professionalism of all on stage was evident. Brendan himself sang every word with total passion and conviction with an immediate connection with the audience. Again, I need to be honest I struggle with names of songs and whilst I have always loved 'the Wheatus sound' would always struggle to name songs further than the obvious hits. That changes when you hear them played live and firm favourites now for me are the wonderful 'Lemonade' the amusing and bouncy 'Randall' and the latest single 'Tipsy.'

Matthew Milligan's bass playing is something to behold and his rapport with fellow band members just made me smile, a lot. There is something beautiful about an Electric Upright Bass and boy can Matthew play it, I was in Muso heaven! Brandon Ticer on Keys is just awesome and his assured playing really impressed. Brandon clearly enjoying his Wheatus experience and if it were possible for a keyboard player to bounce around the stage whilst staying at his keys then Brandon would do it! As I mentioned before the percussive sound of Wheatus had always been central for me and Leo Freire on drums brings an explosive brilliance to the live experience. Leo is one of those drummers who you can watch for hours and all I can say is he must feel like he has done a full work out after a gig. Joanne Slater-Milligan & Gabrielle Sterbenz have the sort of voices that you can listen to unaccompanied for hours and their powerful and confident vocals perfectly balance with Brendon's lead. By the way ladies, loved the dancing as well, I couldn't stop smiling!

The final song of the night was the biggy and the intro bars to 'Dirtbag' are as anthemic and innovative as the first time you heard it. Welcome back to Mike Doughty for a rapped verse and the band are saying goodnight vowing to come back soon. The crowd leave fully satisfied and the pack down starts in earnest.

Wheatus have supported some of the biggest names in the music industry and have played sold out gigs at Stadiums and Festivals around the Globe. 'Dirtbag' has been covered by One Direction, Weezer, Skala and Girls Aloud yet as the audience leaves the venue it is the band themselves that clears the stage. This simply astounded me and I have so, so much admiration for their hard working commitment. In an age when even the teeniest of teeny bopper bands have hair stylists, PA's for their PA's and 'people' Wheatus have minimal crew and muck in with the heavy lifting! Anyone that has taken part in a lengthy set under unforgiving lights will testify that the last thing you feel like doing is packing equipment away. Most bands feel as if they have arrived when the stage is set up and set down by swarming bands of 'crew' Wheatus are clearly the exception and I leave the venue having had my love for a band rekindled and my admiration reignited.

Special mention to Jane Greenwood who is in charge of all things Merch for the band but also runs the official Wheatus Fan Club. Jane's passion for the band and commitment just bowled me over and I hope that I get to see her and the band again soon. I love it when those who sell the t shirts and other band product are as engaged with the fans as the band, if you are at a Wheatus gig to take time to say hi!

It isn't just 'Dirtbag' that is timeless it is Wheatus themselves and I have the deepest of love and respect for Brendan Brown. Independent Creatives are constantly challenged to move towards to the mainstream and for their output to be shunted to wherever the most money can be made. Brendan Brown is a creative force who will never ever deliver what is expected of him but instead has set his goal on making the music he wants to make. Looking at the smiling faces around me and the loud, rapturous applause he is delivering for the fans as well. Don't stop Brendon, just keep doing what you love because we love it as much as you do.

Watch the video for Tipsy, the first single from Wheatus' 7th album then download the single now at www.wheatus.com.  Music Video by A D Lane using his own film footage shot over the course of the 2017 UK tour, as part of his upcoming documentary 'Wheatus, You Might Die' (to be released in 2018).