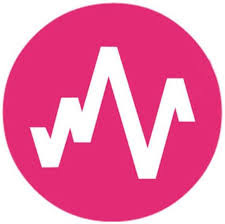 VentSpleen indulged his inner geek at The Science Museum and it was all because of four old men and a room full of tech. Oh and a Blue Box, mustn't forget the Blue Box...

A long time ago, in a galaxy that was exactly like ours but way before I was born, there existed a rag tag group of talented mathematics geniusesi and musicians. Their ongoing mission was to seek out strange new sounds and new audio technology and to boldly go where no BBC employee had gone before. In 1958 the Radiophonic Workshop was formed with a remit to create sound effects to be included with the Corporation's Radio and TV Output. It wasn't to create music, as everyone knows that must only ever be delivered by an orchestra (yeah right, you tell that to Vangelis), but to provide soundscaping and effects to support the telling of the stories. You can read all about the origins and historical background on the Workshop here because I want to focus on now and Radiophonic live. And Mark Ayres' tenure as Eighties Who Composer is something that I am going to unashamedly go on a bit about, the man is a sci fi GOD!

I love the Radiophonic Workshop and I was the sort of obsessed sound effects geek that would regularly take out their albums from the library just to listen to Ray Gun #2 or Electric Door Opening #4. The thing you have to remember is that back then, Sci Fi on TV looked really rubbish. It was all shaky walls and unconvincing monster costumes that looked like they were made by Blue Peter. Who could ever forget that horrific moment when Noah was taken over by a particularly vicious batch of cling film, painted green(Doctor Who and The Ark in Space.) The Radiophonic Workshop created incidental music and sound effects that managed to radically transform this potentially laughable visual to something tremendous. These guys are legends and they also jump started the wave of synth driven prog rock so successfully that I would argue the whole of the Eighties music scene would have turned out very differently without their output. Sadly, the trailblazing work that the Radiophonic team were doing came to end in 1998 but, a few years later, something amazing happened.

To be honest I don't know how many gigs they had done before I stumbled across the grainy You Tube footage but I remember it was taken at Glastonbury. Radiophonic Workshop performing the extended version of Ayres' Eighties Doctor Who theme LIVE! Before Murray Gold rebooted the Doctor Who theme there was Ayres' delicious Eighties rendition of the most iconic and instantly recognisable Television Theme that has ever existed. One of my biggest criticisms with the more recent Who theme versions is that they have replaced the electronic Who Bass with an orchestral one. I would like to petition now for the return of the Who "Dun De Dun" for future series. So, for me, last Friday night's gig at The Science Museum was so much more than a celebration of tremendous music, it was an opportunity for me to pay homage to a group of people that made me the full on ubergeek I am today. 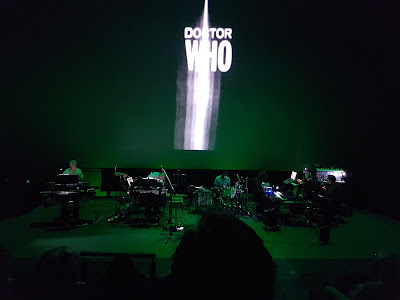 Before the Radiophonic Workshop took to the stage, we were treated to a half an hour Q and A and it set the mood perfectly. Who knew that Delia Derbyshire created the iconic Who Bass by sequencing tiny pieces of recorded tape for each of the beats? At a time way before sequencers and multi track this was the only way to build electric and multi layered synth scaping and it was a painstaking task. The love and affection which the team clearly have for their work and the Radiophonic Workshop was evident, even bordering on obsessive.

In addition to performing incidental music from the likes of Hitchhikers Guide To The Galaxy and Doctor Who the Radiophonic Workshop were also showcasing  material from their new and very recently released album, Burials In Several Earths. Any self respecting fan of electro synth magic should own this album it is simply sublime. The aforementioned Hitchhikers section was a delight as it was supported by scenes from the TV series adaptation (if you think the Martin Freeman starring Film version was better than you really have no place reading this) At a Radiophonic Workshop gig you are treated to what can only be described as Synth porn. Look there's a top of the range Korg, isn't that a modulated Moog synth and what the heck is Ayre's playing (its all dials and analogue waveyness) he probably built it himself. If that wasn't enough though, these guys can play guitar and there is some serious retro fretwork going on plus one of those electro voice modulators that Bon Jovi is keen on. It is just amazing and I didn't stop smiling all evening. Some of the performed works are exactly as you expect and soundscape so effectively you could be transported out of your seat to Galifrey or Southend (complete with a rock solid still sea and buildings that wash up and down) but there are a few that surprise. Prog rock with a tinge of funk and these guys know their musical styling! 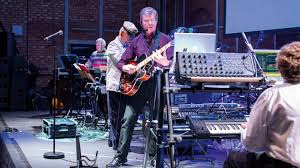 The IMAX surround sound further served to demonstrate that not only were Radiophonic Workshop ahead of their time but they can still entertain an audience at the same level of professionalism you would expect from any of today's modern pop outfits (No Direction?) I would thoroughly recommend that anyone who has a deep love of top notch synth with a sprinkling of British retro Sci Fi theme then you can't go far wrong with attending a RadiophonicsWorkshop gig. 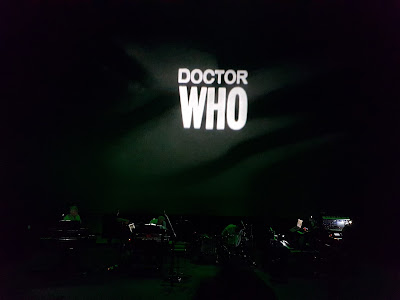