Review - Citizens of the World Choir 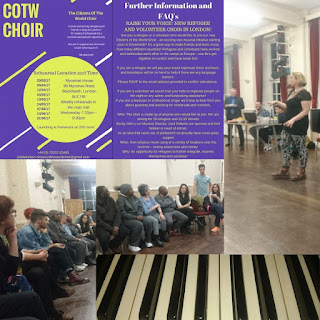 The uniting power of song was brought home to VentSpleen at the Citizens of the World Choir official launch concert last week...


Tuesday 20th June 2017 was World Refugee Day and the focus was on raising awareness and money to support the countless numbers of human beings who had been turned out of their own homes, their own countries. My own view on the media tendency to dehumanise this world crisis is not something I am quiet about. Like countless others around the world, I have been brought to tears on many occasions as I view the images and hear the stories of normal families and the scale of loss and cry of terror that threatens to engulf our world. I have sought to find a response and turned to the arts and music to find a way to counteract a very biased and one sided reporting which would portray all refugees and asylum seekers as either terrorists or benefit scroungers. The purpose of this review is not to shove my views down the readers throats and I urge you to seek your own truth and make up your own minds. However, I have found my outlet and it came about because of one lady and a handful of moral and compassionate MP's, oh and Lord Roberts.

I met Becky on Twitter, two days after the horrific London Bridge attacks, and I was struck by Becky's tenacity and her vision. She was leading the choir in song at Trafalgar Square, as part of a vigil held in memory of those who were affected by the terrorist attack. The choir needed a pianist for some upcoming concerts and I offered to step in, their inaugural performance was to be my first experience of a live performance. 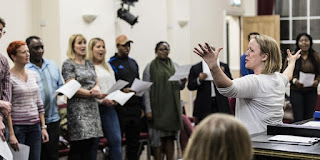 The Citizens Of The World Choir is the brain child of Lord Roberts and was born out of a burning desire to see boundaries and divides smashed apart through the healing power of music. Lord Roberts enlisted the passionate support of Becky Dell, with whom he had worked with at Westminster for DUBS Amendment (Child Refugee Rights) Becky is a talented musician and performer who also runs a Music School, so has the exact level of expertise to develop a community choir. Since launching the choir in March 2017 Becky has brought together people from some of the most troubled countries in the world. Many of the choir members have never sung in public in this way and bring with them a cultural richness that is simply sublime. After just 9 rehearsals the choir has put together a set of songs that challenge perception and prejudice without ever being preachy or overbearing. Put simply, this is a choir that performs with heart, mind, body and soul. The launch night and two performances were held at the Palace of Westminster, at the heart of our nations' government. As well as performances by the choir, the evening was to include a poem read by actress, Emily Watson, performances by Mabel Ray, Zoe Gelber and Ian Shaw. 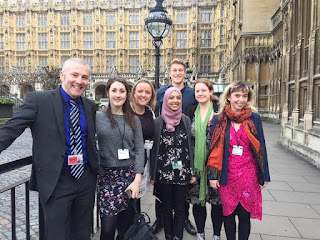 The concert opened with a beautiful rendition of 'Ode To Joy', the anthem of the European Union, which set the focus on the evening on open arms and inclusion rather than introverted, self serving views. After a stirring introduction by Lord Roberts of Llandudno we move to the choirs first song of the night. 'Siyahamba' is a well known Zulu folk song and with an upbeat and rhythmic arrangement went with a swing. The choir, full of smiles and loud voices were clearly enjoying every moment and any last minute nerves quickly vanished. Becky Dell's conducting prowess is nothing short of astounding and she leads with the surety and skill that effectively helms the choir. The audience are already spell bound and when you hear the choir perform it is simply staggering that they have only been together for 3 months. The jazzy 'What a Wonderful World' is given a beautiful new arrangement with a delightful swing but then delivers an astonishing syncopated handful of bars. The third song is more classical flavoured. The beautiful 'Sure on this Shining Light' treats us to Soprano, Marianna Suri. Marianna has a voice which I could listen to for hours and her vocalisations are musical nectar. The choir handle ,what is a challenging classical piece, with the skill you would expect from a choir of considerable ability. Ian Shaw is a jazz singer that is more familiar for his radio show (Ronnie Scotts Radio Show) and it may be a surprise to some that he is a vocal supporter of human rights. His performance was preceded by one of the many personal stories of the Calais Jungle and I defy anyone to listen to these accounts and remain cold hearted. His performance of the Stevie Wonder classic 'If It's Magic' was every bit as accomplished as you would expect.

Actress Emily Watson's recitation of Warsan Shire's poem 'Home' guaranteed there wasn't a dry eye in the house. I don't need to say anything more about this as I include a link to the poem and just reading it is enough. An appropriate emotional response was given by Mabel Ray's performance of Carol King's 'You've got a Friend'. Ray's musical talent is something I have admired for a considerable time and she holds back none of the achingly painful heart cry that the performance was transformed into. Zoe Gelber's delivery of Bridge Over Troubled Waters has never felt more relevant as compassion and a desire to see people's pain and grief supported is what is needed right now in our nation.

The final three songs are more upbeat and are a celebration of life and unity. The wonderful mash up of Pachelbel, I Wish I Knew How It Feels To Be Free and I'd Like To Buy The World A Coke (fully licensed by the CEO of Coca Cola) is an absolute triumph. This is a choir that knows how rock! Safe Passage is an original concept piece by Tess Berry-Hart and is sung in three different languages. Its profound message of life as a journey which we should all be able to travel is powerful and resonant in today's uncertain times. Safe Passage is one of those songs that, once you've heard it, stays with you for days later! The concert is concluded with a version of Scarborough Fair which managed to achieve something I never thought possible. Ever since my school days I have harboured a deep hatred of the song, it just doesn't go anywhere and just takes up valuable music scoring space. The version that the choir perform has an Arabian rap in the middle and percussion that lifts the song to a different planet. I love this version of Scarborough Fair now and, for me, it is the definitive version.

Special mention to the considerable skills of Tom Donald who's abilities at the piano made me ever so slightly envious. He possesses a rate ability in that his timing is as good as his phenomenal capability to both sight read and improvise. Listening to piano playing of that sort of level is always one a pleasure! 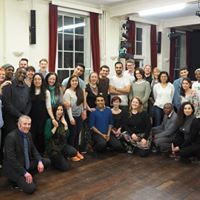 Walking through the grand and ancient halls within Westminster to attend a concert by a choir that is attempting to bring people of different nations together, I am struck by a conflict of feelings. Is it possible that music and the arts can achieve what scores of politicians have failed to do? Without hours of debate and loud tiresome rhetoric the choir has achieved the seemingly impossible. Demonstrating that it is imperative see each and every human being on the planet as deserving of life and that home should be a peaceful and safe place, wherever you choose it to be. We can stand as one against the racist hate crime and those that threaten liberty and choose to act in anger using the tools of violence and destruction. But, instead of spending our time debating and creating rules, red tape and policing immigration numbers, we can see the beating heart of our fellow brothers and sisters.