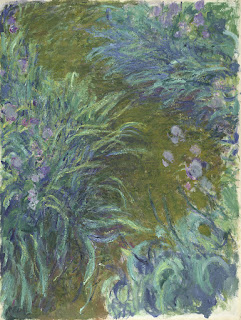 Inspired by David Ames’ Monday Motivation shuffle, for this week only, Susan Omand hits the Take a Chance button on the National Gallery website and writes about what she sees...

This painting probably evolved alongside Monet’s 'grandes décorations' in his vast purpose-built studio at Giverny. This bird’s eye view, possibly from the Japanese bridge, shows a winding path near the pool, bordered with lush irises. Monet applied thick purples, blues and greens using bold, even crude strokes. The effects were possibly induced by double cataracts which altered his vision. 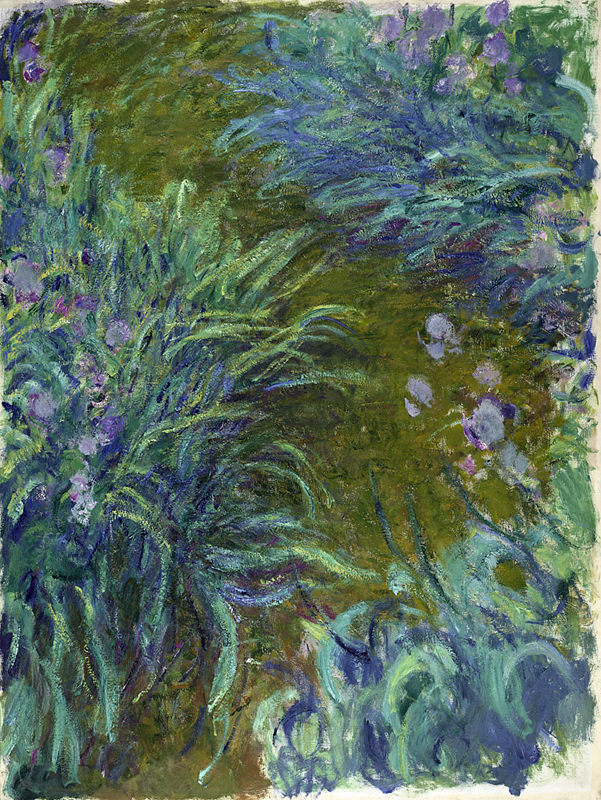 I always find it interesting with Impressionist paintings such as those by Monet that you tend to concentrate more on them than with other works as the brain tries to make sense of the shapes and colours because you know you should see “something” and are trying to grasp at what it is. The lack of contrast, of black and white, also makes for a very dreamlike blur and lulls you into some sense of security that it’s ok that you don’t quite see.

I really like the fact that it’s called Irises and yet it’s the path between the flower beds that holds the attention rather than the flowers themselves which are not even given a bright pop of colour. I also like the fluidity of the foliage, almost turning the leaves into fountains of water and I like the way the path bisects the flowers and draws the eye down the picture.

It’s a bit chocolate boxy. I am not a fan of muted shades and would have liked a more contrasting colour palette as has happened in the brightened image above. Otherwise it’s just all a bit hazy and needs some definition, if not with lines then with colours.

Yes if I had to. It’s abstract enough that it becomes background ambient noise and lulls without disturbing.