This year's display will be the most extensive to date, with 20 original, screen-printed film poster artworks inspired by the Film4 Summer Screen programme.

Emerging and international artists respond to a moment, theme, character or quote from their favourite film in the season, including Joe Cruz, whose colourful and intimate work captures a pivotal moment in this year's 'Best Picture' Oscar winner Moonlight, while Hattie Stewart's bold and striking reimagining of Cruel Intentions bares the malice of the cult film's protagonist.

This free exhibition, open each day across the season, will enable visitors to buy the original, affordable works at Somerset House and on the Print Club London website for £60. With effortless access to the exhibition from the Edmond J. Safra Fountain Court, film-goers will be able to enjoy special late openings ahead of each film screening.


Behind the Screen [Selected dates between 10-23 August 2017]
Prices vary, from free to £10
Behind the Screen celebrates the art of cinema and shines a spotlight on themes presented in this year’s festival programme, with an entertaining line-up of talks, workshops and screenings for all ages.

Film-lovers will be able to gain rare access to the insights of industry insiders, and enjoy a host of film-focused activity ahead of selected nights’ headline screening in The Edmond J. Safra Fountain Court. Events include:
Ruben Östlund: In Conversation: the director of this year’s Palme d’Or winner The Square, reveals his film inspiration and processes ahead of its UK premiere at Somerset House on 16 August.
Alice Lowe: Raising Hell presents the actress and writer who will discuss the delivery of her own ‘demon child’ – her directorial debut Prevenge – prior to the screening of The Omen on 12 August, as part of a double-bill also featuring Donnie Darko. Lowe will also speak on creative inspirations in her wider body of work.
On 14 August, Behind the Screen will bring together some of the best work from the new Channel 4 series of ‘Random Acts’ shorts.
Drop-in family workshops will take place alongside special screenings over the two weekends of the festival. On 13 August, workshop ‘Sustainable Me’ will focus on intelligent ways to preserve our planet, taking inspiration from a screening of beloved Disney/Pixar favourite WALL-E. A further family screening of Studio Ghibli animation Ponyo on 20 August will inspire workshop ‘Animate Me’, where participants will learn to create anime-style self-portraits and discover more about the famous Japanese animation universe. 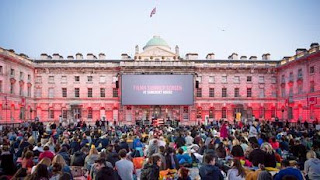 Special Introductions
Across the season, stars and directors will make guest appearances to introduce their films to Somerset House audiences. Introductions will include:
Former U.S. Vice President Al Gore will present the UK premiere of An Inconvenient Sequel: Truth to Power on the season’s opening night.
Actors Dominic West and Claes Bang, and director Ruben Östlund, will introduce the recipient of this year’s Palme d’Or, The Square, ahead of its UK premiere at Somerset House.
The cast of Bhaji on the Beach will be on site in celebration of Gurinder Chadha’s award-winning debut about a group of Asian women on a day-trip to Blackpool.
Patti Cake$ director Geremy Jasper and the film’s star Bridgett Everet will introduce the film before its premiere on the closing night of the season.

Bespoke sundown DJ sets
Specially selected DJ sets will animate The Edmond J. Safra Fountain Court and set the atmosphere for the evening, providing a musical insight into the films through the themes, genres and musical eras of each night’s screening. DJs entertaining film-goers will include:
Former BBC 1Xtra presenter and winner of the DMC World Championships, Blakey, prior to In Bruges on Friday 18 August.
The founder of the legendary London club night Blow Up, Paul Tunkin, before the film of the same title on Tuesday 22 August.
Songwriter, performer and former Ash guitarist Charlotte Hatherley ahead of the Jaws and Deliverance double-bill on Saturday 19 August.
LJ, heralded by NME, Vogue, i-D and Time Out as one of the foremost party starters, in advance of fan favourite Cruel Intentions.