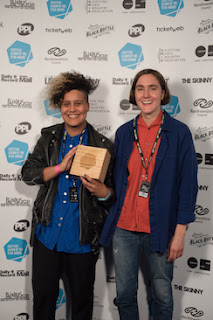 The 2017 winner of the most coveted music prize in Scotland has been announced...

At a ceremony presented by co-hosts Vic Galloway and Nicola Meighan at Paisley Town Hall, an audience of industry insiders, avid music fans and some of Scotland’s best and brightest creative talent watched as the album Strike a Match from Sacred Paws emerged as the winner from a fiercely competitive shortlist, winning the £20,000 first prize and beating bands such as Mogwai, The Jesus and Mary Chain, King Creosote and Teenage Fanclub.

Band member, Rachel Aggs was overwhelmed by their win, saying: “I just want to say thank you so much, thanks to the SAY Award, thanks to the judges, thanks to everyone at Rock Action and I can’t believe it! I’m trying really hard not to swear! We are not always the most confident people and I think playing music has a lot to do with confidence so this is completely overwhelming and we don’t feel like we belong here but at the same time we feel validated for what we do. Thank you.”

Formed in 2014, Sacred Paws, comprised of vocalist and guitarist Rachel Aggs and drummer Eilidh Rodgers, released their debut album, Strike A Match on 27 January on Glasgow label Rock Action Records. The duo, based between Glasgow and London, received critical acclaim from the likes of Clash Magazine, Pitchfork, Q Magazine, DIY Magazine, amongst other titles and can now include Scottish Album of the Year to their repertoire.

Produced by The Scottish Music Industry Association (SMIA), and now in its sixth year, The SAY Award has grown to become the most prestigious music prize in Scotland. For the past two years, the award has teamed up Renfrewshire Council, supporting the Paisley bid for UK City of Culture 2021. The shortlist served to highlight the very best in Scottish music, spanning a range of genres and audiences (see notes to editors).

The winner of this year’s public vote was the poignant Future Echoes by Pictish Trail, which won an automatic place on the shortlist after a 72-hour public vote. The remaining nine slots were awarded by The SAY Award’s panel of independent judges, including Stuart Cosgrove and Amy Liptrot. Each of shortlisted bands won a £1,000 prize, and all ten received a 3D printed plate produced by Glasgow School of Art graduate and Paisley jeweller, Lisa Crockard.

The SAY Award’s chosen charity this year was Help Musicians UK. It is their mission to create a sustainable future for all musicians and the industry, and is looking to create innovative opportunities for Scottish musicians and the music sector to develop their talent, skills and experience.

Alan Morrison, Head of Music at Creative Scotland, said: “Massive congratulations to Sacred Paws for their SAY Award win. Strike A Match is such a warm, energetic record, full to the brim with musical influences from all over the world. Yet again a SAY Award jury has decided that a debut release is a worthy winner – proof that there’s always exciting new talent ready to be discovered on the Scottish music scene.”

Peter Leathem, Chief Executive of PPL added, “For decades, Scotland has been a thriving hotbed of musical talent, nurturing artists as diverse and varied as Orange Juice, Belle & Sebastian and Camera Obscura right through to Biffy Clyro, CHVRCHES and Young Fathers. This is why, at PPL, we think it is vitally important to continue our partnership supporting the SAY Awards, an event that recognises and puts on a spotlight on some of the best music coming out of Scotland.”

The SAY Award is a Scottish Music Industry Association (SMIA) production, in partnership with the National Lottery through Creative Scotland’s Open Project Fund, Renfrewshire Council, Black Bottle, TicketWeb and PPL. The SAY Award is delighted to support Paisley’s bid to be UK City of Culture 2021.