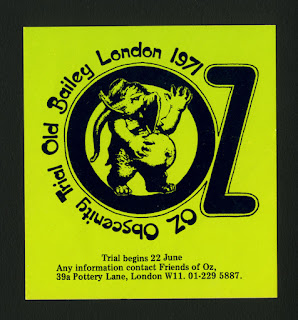 The V & A has acquired the Felix Dennis Oz Archive, marking 50 years since the first UK publication of the revolutionary magazine...

Felix Dennis was co-editor of the underground magazine Oz, published between 1967 and 1973, which sought to challenge the establishment and encapsulated the spirit of 1960s and 70s counter-culture. His archive not only recounts Oz’s kaleidoscopic history across its 48 issues but chronicles one of the most politically and socially revolutionary periods in world history. The Archive, purchased with Art Fund support, joins the V&A’s world renowned Theatre and Performance collections alongside the archives of the Royal Court Theatre, Hapshash and the Coloured Coat and Glastonbury Festival. The Archive is currently being catalogued and digitised by the V&A, and highlights will feature in a forthcoming display tracing a history of British censorship, opening in summer 2018.

Tackling subjects from gay rights to racism, the environment, feminism, sex, the pill, acid, rock music and the Vietnam War, Oz is one of the most important records of 20th century countercultural revolution. Produced in a basement flat in London’s Notting Hill Gate by three editors, Richard Neville, Jim Anderson and Felix Dennis, the magazine was renowned for its psychedelic covers by pop artist Martin Sharp, cartoons by Robert Crumb, radical feminist thought by Germaine Greer and provocative articles that called into question established norms of the period. 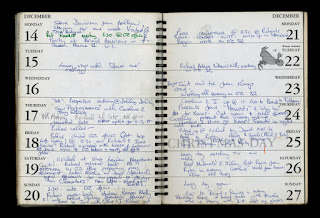 In the early 1970s, Oz became the subject of the longest obscenity trial in British history after it was raided by the obscene publications division of the Metropolitan Police in 1970. Dennis, Neville and Anderson were charged with conspiring to corrupt the morals of the young for Oz #28, an issue created entirely by school children, which included a sexually explicit parody of the Rupert Bear cartoon strip. In response, the Friends of Oz campaign group was formed and a publicity campaign launched in support of the editors. Posters, flyers and stickers were produced; the Elastic Oz Band was formed and released 'God Save Us' featuring John Lennon and Yoko Ono; celebrities agreed to give evidence at trial and an Independence Day Carnival was staged to support the defendants and protest against the Misuse of Drugs Bill, censorship laws and the growing climate of government repression. The three editors were eventually acquitted of the conspiracy charge, but jailed for two other minor offences. However, all three eventually won their appeals and were released.

The newly acquired Felix Dennis Oz Archive includes items related to the Oz Obscenity Trial, including badges, shirts, stickers and flyers distributed on the streets in 1971. It also includes a typescript of ‘God Save Us’ by John Lennon and Yoko Ono. Other highlights include personal correspondence, diaries and cuttings belonging to Dennis from his Oz years, such as material related to the running of the magazine and a letter he received from his mother during his time in jail. The Archive also contains a series of posters created for the magazine by Hapshash and the Coloured Coat, Michael English, Martin Sharp and David Hockney. Rare original artworks, layouts and photographs organised by issue form part of the acquisition, including the hugely significant Magic Theatre issue (Oz #16) produced by the Australian artist Martin Sharp and film director Philippe Mora. Sharp and Mora lived and worked in the Pheasantry, a 1960s artist colony in London’s Kings Road, which also housed Germaine Greer, Eric Clapton and David Litvinoff. The Magic Theatre issue encompassed a multi-media manifestation of collage, film, happenings, light shows, theatre and photography that had never before been seen in magazine form. 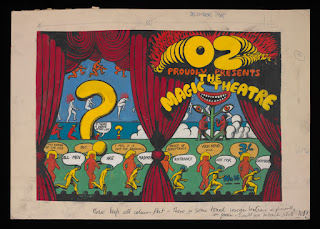 Geoffrey Marsh, Director of the Department of Theatre and Performance, V&A, said: "Oz was one of the leading magazines of the underground press in 1960s and 70s. Fifty years on, it forms an important time-capsule of revolutionary ideas of the period. This material deserves to be preserved at the V&A because the magazine and eventual legal battle over Oz represented a much broader and fundamental shift in British society in the 1960s. It raised the question: should, or even, could ‘The Establishment’ dictate what ordinary people saw, read and thought, or would the public be left alone to make up its own mind? Through a wealth of visual material, the archive chronicles this key turning point in British culture and offers a reminder that the powerful never relinquish control without a struggle." 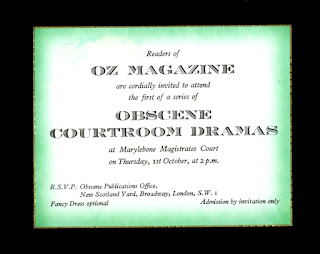 Stephen Deuchar, Art Fund Director, added “We’re very glad to support the V&A in this unique opportunity to acquire an archive of great importance to the cultural and political history of 1960s Britain. The diverse contents of the archive will resonate powerfully both with the wider collections of the V&A and, of course, with the visiting public.”

Felix Dennis (1947 – 2014) was a British editor, publisher, poet, spoken-word performer and philanthropist. Following the closure of Oz, he went on to establish one of the world's leading independent media companies, Dennis Publishing, specialising in hobbyist publications. The themes and materials contained within the Felix Dennis Oz Archive form a legacy of the V&A’s 2016 major exhibition You Say You Want a Revolution? Records and Rebels 1966-1970. The exhibition explored the era-defining significance and impact of the late 1960s, expressed through some of the greatest music and performances of the 20th century, alongside fashion, film, design and political activism.

Title: Diary of Felix Dennis during for the period of 14-27 December 1970 covering police raid on Oz offices (c) Victoria and Albert Museum, London