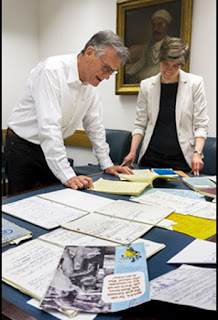 Michael Palin has donated his personal archive of his literary and creative career to the British Library...

The archive, which has been generously donated to the British Library by Palin, covers his literary and creative life during the years 1965-1987. It includes over 50 ‘Python Notebooks’ containing drafts, working material and personal reflections relating to Palin’s Monty Python writing. It also includes his personal diaries kept during this period, and project files comprising material relating to his film, television and literary work, including correspondence, drafts and annotated scripts relating to subsequent Python projects.

Rachel Foss, Head of Contemporary Archives and Manuscripts, said of the donation "We are thrilled that Michael Palin has chosen to donate this fascinating and wide-ranging collection to join the British Library’s holdings of contemporary archives. Michael’s contribution to comedy, film and television over the past 50 years has been enormous, in particular through Monty Python which has had an unparalleled influence on British comedy and internationally. We’re looking forward to making it available for researchers, students and everyone with an interest in post war popular culture. It’s particularly exciting to think that the comedy talent of tomorrow may find inspiration from this collection.”

Michael Palin added, “My work has been inspired by, and created in, this country, so I’m very pleased that my archive has been accepted by the British Library, and that they will make it publicly available, so that future generations will know not to make the same mistakes again.”