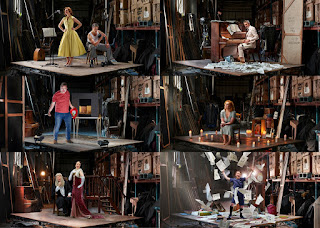 Building on its reputation as one of the UK’s most innovative opera companies, Opera North celebrates the artform’s variety and intensity this Autumn with a festival season like no other....

The Little Greats brings together six brand new productions of short operas, all bursting with huge emotions, each offering a powerful operatic experience in around an hour.

The season journeys through much-loved opera and rarer stage works, including the raw, hot-blooded passion of iconic Italian verismo with Leoncavallo’s Pagliacci and Mascagni’s Cavalleria rusticana. It takes in the popular charm and unmatched comic style of Gilbert and Sullivan’s operetta Trial by Jury, delves into the inventive musical modernism of the early 20th century in Ravel’s L’enfant et les sortilèges and Janáček’s Osud (Destiny), and ends in the 1950s with Leonard Bernstein’s Trouble in Tahiti, a dazzlingly witty fusion of operatic conventions with the newer idioms of American jazz, Hollywood and musical theatre, presented in Bernstein’s centenary year.

As Annabel Arden (Director, L’enfant et les sortilèges and Osud) says, “The Little Greats aren't stuffy or about big sets and costumes; what they are about is telling a story with music and moving our audience to tears — and laughter.”

Opening from 16 September 2017 at Leeds Grand Theatre, the six operas are presented in a radical ‘mix-and-match’ rotation, creating an ever-changing series of new and unusual pairings. Tickets for each short opera are sold separately, giving audiences the flexibility to choose their own path through the season. Anyone new to opera in Leeds can take advantage of a £10 ticket offer, which will make the best available seats cheaper for newcomers at every single performance, generously funded by the Opera North Future Fund. After running in Leeds, The Little Greats season tours, in fixed double-bills, to Hull, Nottingham, Newcastle and Salford.

A SHOT OF PURE OPERATIC ADRENALINE

The curtain-raiser for the season encapsulates the thrilling drama, raw passion and gritty realism of Italian verismo opera. Conducted by Tobias Ringborg and directed by Charles Edwards, in Pagliacci (The Clowns) Leoncavallo carves a ‘bleeding slice of life’ out of the tale of a touring theatre troupe preparing for a show. Canio (Peter Auty) is eaten up with jealous suspicion of his wife Nedda (Elin Pritchard), the leading lady. When he learns the truth, the stage is set for a violent reckoning, but as his celebrated aria ‘Vesti la giubba’ (‘Put on the costume’) says, the show must go on.

A young boy refuses to do his homework and flies into a tantrum. But in this childhood fable of enchantment, everything around the boy comes magically to life.

A RED-BLOODED TALE OF JEALOUSY AND REVENGE

A soldier, Turiddù (Jonathan Stoughton) has returned from the army to find his lover has married another man. He consoles himself by seducing another girl, Santuzza (Giselle Allen), even though he is still consumed by his obsessive desire for his first love.

Polish director Karolina Sofulak puts an innovative slant on a classic, in which a powder keg of passions is primed to ignite at Easter, in the midst of a small community where the church maintains an iron grip on the souls of its people. Conducted by Tobias Ringborg, the cast also includes Rosalind Plowright as Mamma Lucia.

The glamorous Angelina (Amy Freston) brings a court case against her intended husband Edwin (Nicholas Watts), who jilts her when he comes to the ghastly realisation that she bores him intensely. With its brilliantly witty comedy numbers, catchy tunes and a superb mock-operatic ensemble, Trial by Jury was Gilbert & Sullivan’s first operetta and launched a partnership that took British musical theatre by storm.

It is cast entirely from the Chorus of Opera North who showcased their versatility in last year’s musical success, Into the Woods, in collaboration with the West Yorkshire Playhouse. Jeremy Peaker, a founder member of the New D’Oyly Carte Opera Company, plays the Learned Judge in this new production, conducted by Opera North’s Chorus Master Oliver Rundell, and directed by John Savournin, Artistic Director of Charles Court Opera.

A UNIVERSAL TALE OF THE ANGUISH OF LOVE

Míla (Giselle Allen) and the composer Živný (John Graham-Hall) are in love but Míla’s mother (Rosalind Plowright) forces her to take a rich suitor. Four years later they are reunited and living together but as Živný wrestles with the opera he is writing, a tragedy occurs that changes everything.

Osud contains some of Janáček’s most glorious music, which swings from the heights of romantic ecstasy to the depths of despair and back again. A real operatic gem, this is a chance to see a rarity brought to life in the hands of director Annabel Arden and conductor Martin André.

A SATIRE ON THE AMERICAN DREAM

In 1950s suburbia, Sam (Quirijn de Lang) and Dinah (Wallis Giunta) appear to have the perfect life in their little white house. But their growing detachment exposes a mutual feeling that they are trapped in a life that has turned into a lie. Sam escapes to the hyper-masculine, win-or-lose world of work and the gym, while Dinah loses herself in the movies, where the hit picture of the day is the ominously-titled Trouble in Tahiti.

Presented in the composer’s centenary year, Leonard Bernstein’s score for his deeply touching first opera is heavily influenced by the syncopated rhythms of jazz and by the distinctive American vernacular of Hollywood and Broadway. This new production, a first for Opera North, is directed by Matthew Eberhardt and conducted by Tobias Ringborg.

For more information on all the performances and to book tickets, please visit the Opera North website.