The winner of the BP Portrait Award 2017 has been announced at the National Portrait Gallery, London...

The prestigious first prize - in the 28th year of BP’s sponsorship of the competition - was won by Suffolk based artist, Benjamin Sullivan for Breech!

Grimsby-born, Benjamin Sullivan, who lives in Suffolk, gained a BA (Hons) in Drawing and Painting from Edinburgh College of Art. Benjamin’s work has been seen regularly in the Royal Society of Portrait Painters exhibition and he has previously been selected twelve times for the BP Portrait Award in 2002 and between 2006 and 2016 when his portrait Hugo was awarded third prize. His portrait of the cosmologist and astrophysicist Professor Martin Rees was commissioned by the National Portrait Gallery in 2008.

Breech! depicts the artist’s wife Virginia breastfeeding their eight-month-old daughter Edith, at a time when Sullivan says ‘a sense of calm descended after the usual period of disarrangement that new parents face.’ The artist wanted to celebrate the love that had come into their lives and reflect on the worrisome time the couple faced during Edith’s birth. The painting was made over four to five weeks in the artist’s studio when Edith’s cooperation was forthcoming.

The winning portrait was selected from 2580 entries from 87 countries, submitted for judging anonymously by a panel which included broadcaster Kirsty Wark and artist Michael Landy. The judges were particularly struck by the tenderness and intimacy of Sullivan's composition, evoking Madonna and Child paintings through the ages and the depth of the maternal bond. Commenting on the portrait, Kirsty Wark said ‘The woman is tired. She is in love. Her life has changed forever. We know her.’

The portrait can be seen at the National Portrait Gallery from Thursday 22 June when the BP Portrait Award 2017 exhibition opens to the public. Admission to the exhibition is free. 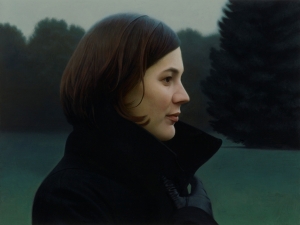 The second prize of £10,000 went to French painter and illustrator, Thomas Ehretsmann, for Double Portrait, depicting his pregnant wife Caroline. Born in Mulhouse France, Ehretsmann gained a degree in illustration from the Ecole des Arts Décoratifs, Strasbourg. His work as an illustrator has been featured in the New Yorker, Rolling Stone and Elle Magazine. His portrait Vacuum 2 was selected for the BP Portrait Award 2016 exhibition.


Double Portrait captures a moment when the artist was walking in the park with his wife, Caroline. Ehretsmann was struck by the light on Caroline’s face which he said reminded him of the work of naturalist painters Jules Bastien-Lepage and Emile Friant. The artist used multiple layers of semi-transparent acrylic paint in order to mix a fragile instant with something more timeless, a technique often used in his art. The title, Double Portrait, suggest the passage from one state of being to another as Caroline was eight months pregnant at the time.The judges were particularly impressed by the artist’s refined and detailed technique, which adds to the subject’s sense of stillness, strength and serenity. 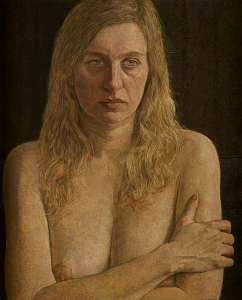 The third prize of £8,000 went to Antony Williams for Emma his portrait of model turned friend, Emma Bruce, completed in his studio in Chertsey. Antony Williams studied at Farnham College and Portsmouth University. An established portrait artist, his work has been seen in solo exhibitions in London and Madrid and included in the Royal Academy of Arts Summer Exhibition, the Royal Society of Portrait Painters Exhibitions and previously in BP Portrait Award exhibitions in 1995, 1998, 2005, 2007, 2010, 2014 and 2015. His portrait of Amartya Sen was commissioned for the National Portrait Gallery Collection.

Emma features Emma Bruce who had been modelling for Williams almost continuously for eleven years in his studio in Chertsey. The artist’s relationship with the sitter has developed over the years from that of being someone who was modelling for a painting to someone who has become a friend. Williams wanted to portray some of her vulnerability, but also the determination in her character where she is shown naked but at the same time is preventing the viewer from seeing her completely.

The judges appreciated how the artist’s intimate and distinctive technique lends the sitter’s form an almost sculptural density and solidity.

The BP Young Artist Award of £7,000 for the work of a selected entrant aged between 18 and 30 has been won by 26 year old New Zealand artist Henry Christian-Slane for Gabi, a portrait of his partner Gabi Lardies. The judges felt this sensitive painting captures a moment in time and a casual, fleeting expression, rather than the ‘held’ pose more usual in formal portrait painting.

The winner of the BP Travel Award 2017, an annual prize to enable artists to work in a different environment on a project related to portraiture, was Casper White for his proposal to create works about music fans in clubs and concert venues in Berlin and Mallorca, representing an often youth-related subculture that is not traditionally recorded in portrait paintings. The prize of £6,000 is open to applications from any of this year’s BP Portrait Award-exhibited artists, except the prize-winners.

Dr Nicholas Cullinan, Chair of the Judges and Director of the National Portrait Gallery, London, said ‘Many congratulations to our prize winning artists and all those selected for the exhibition. As always, it’s been an enormous privilege to chair the judging panel and see firsthand some of the most exciting and innovative work being produced by artists of all ages, and from all over the world. The competition, recognised as the most prestigious in the field of portrait painting in the world, continues to attract the best practitioners of the genre. This year is no exception and I hope visitors will enjoy the diverse range of styles and sitters in the exhibition.