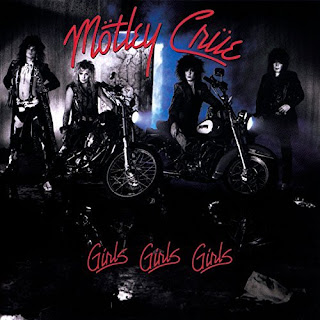 So many well-known albums turn 30 this year and Steve Taylor-Bryant and Susan Omand travel back to 1987 to revisit some of the sounds of their youth that made parents shout "Turn that noise down!" This week, Susan Omand remembers Mötley Crüe and those Girls, Girls, Girls ...

Steve and I made our list of “albums to listen to” for this year’s Turn That Noise Down way back in January, so I must admit it was serendipitous that the week I’d planned to re-listen to Mötley Crüe’s Girls Girls Girls album also sees news hitting the wires of a re-release of the album in a Deluxe Anniversary edition on August 25th. The music gods do indeed work in mysterious ways.


So, will it be worth getting? I guess it depends on what they do to it to make it different from the original – an album which is every bit as good now as I remember it 30 years back.

Girls, Girls, Girls as an album is unashamedly 80’s hair metal. Noisy, trashy, dirty, sleazy (and other names Disney didn't choose for the Seven Dwarves) with distortion-heavy guitars over suitably loud and insistent drums and lyrics sung by a voice that’s smoked way too many Marlborough (and other stuff). What’s not to like?

And I think that’s the thing with Mötley Crüe, they’re a band that you listen to just for the fun of it. There’s nothing pretending to be clever about it, no uber-angsty poetic lyrics or complex chord structures, this is good old fashioned rock n roll with an extra helping of sleaze. They even have a “proper” rock and roll track on the original version of the album with a live version of Jailhouse Rock that knocks the blue suede shoes off of Elvis. The rest of the tracks are feel good, three chord, easy riff songs like the title track or my favourite Bad Boy Boogie, songs that epitomises 80’s hair metal and always lifts my mood, with the addition of the odd metal ballad like Rodeo or You’re All I Need that demands much vodka and waving a lighter in the air.

An exception to this guitar heavy gratification though is Nona, a hugely surprising interlude on the album. A fully orchestrated love song with superb use of strings which, listening to it again now reminds me a lot of Julian Lennon’s beautiful song Saltwater (which was written five years later), and it is absolutely wonderful, not least because it’s so out of character.

2015 saw the band play their final tour but I for one wouldn’t be at all surprised if there wasn’t “something” to accompany the 30 year re-release. We can only hope.