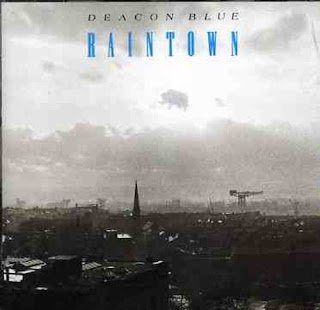 So many well-known albums turn 30 this year and Steve Taylor-Bryant and Susan Omand travel back to 1987 to revisit some of the sounds of their youth that made parents shout "Turn that noise down!" This week, Susan Omand looks back at the debut album from Deacon Blue, Raintown...

If you were anywhere near a radio in Scotland in the late 80s and early 90s, chances are you would hear a Deacon Blue song. It felt like they were everywhere, with so many instantly recognisable hits until they dropped off the scene for a few years in the mid 90’s. The hiatus didn’t last too long though and they reformed in 99, with a new drummer as Dougie Vipond had gone off to further his TV career, although he’s back with them now. I’m getting ahead of myself though - the album Raintown, released in May 1987 was where it all began for Ricky Ross, Lorraine McIntosh et al.

So what of the album? There are, of course, the big hits that everybody knows – Chocolate Girl, When Will You (Make My Telephone Ring?) and the dancefloor favourite, Dignity. Dignity especially was very much of its time, relevant to and reminiscent of working class Glasgow in the 80s – classic but not timeless, in the same way as a Lowry painting is a snapshot of Salford’s “smoky tops” in the 1930s and 40s. I mean how many kids these days would know what a Sunblest bag is, never mind having your lunch packed in one? In fact, listening to the whole album you get the feeling of a story/social history thread running throughout, from the short but evocative introduction piece, Born in a Storm through the Flashdance-y sounding title track of Raintown and a track that could have been a Dignity prequel in lyrical quality, He Looks Like Spencer Tracy Now. They even managed to cadge a famous cameo on the album, with Chris Rea playing slide guitar on Love’s Greatest Fears.

So does it stand up thirty years later? Well, I’m going to be quite controversial here and say that, on listening to it again, it’s OK but I actually prefer most of the tracks on their next album, When the World Knows Your Name. As a debut though, Raintown was very solid both musically and lyrically and a great portent for what was to come.