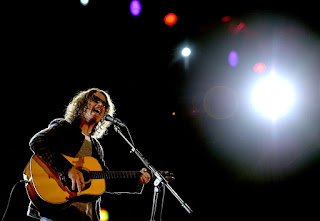 Everyone grows up with a favourite someone. For me drummers are an important part of my life and have usually led me to bands or vocalists I admire, Liberty Devito led me to Billy Joel for example. There isn't usually a vocalist that comes first. Duran Duran was all about John Taylor's bass, Genesis was all about Phil Collins, Tommy Lee was my way into rock music as Motley Crue led to GnR and so on. Then Seattle hit music like Mike Tyson punching some journeyman in the nose. Vocalists became the first thing I noticed. Eddie Vedder, Kurt Cobain, Layne Staley, and the pure controlled emotional power of Mr Chris Cornell. I've seen all but Nirvana live of my Seattle favourites and the consistency of performance of Soundgarden was just astonishing. Never a bad gig, whether a small club in Bristol way back in the Badmotorfinger days, or opening for GnR at Wembley stadium in the 90's. Cornell didn't need massive speakers for you to hear him, he was fucking loud, but his volume and power was completely part of his plan and he never hit a bum note, he managed to sing just for you despite the fact you were one of 90 odd thousand in a stadium. He sang from his soul directly into yours and that's a gift. Soundgarden, Temple of the Dog, Audio Slave, solo stuff, James Bond themes it didn't matter he had you at the opening note.

In recent times we've lost stars considered bigger in stature or in fame or in sales but losing Chris Cornell is the first time I've felt like I've lost a friend. I never met the man, I've heard only good things from those lucky enough to have spent time in his company, but he wrote and sang my soundtrack, he guided me through darkness, he celebrated my accomplishments. He was truly the epitome of a rock "god". I'm full of sadness today, I can't find a particular tune of his to lift this funk so for those who feel like me, or for those that want a clue as to why millions of people are feeling like me today jump on your streaming service of choice and play Jesus Christ Pose, Spoonman, Black Hole Sun, Hunger Strike, Fell on Black Days, or the Bond tune You Know My Name.

I know his name, he was my audio friend Chris Cornell.