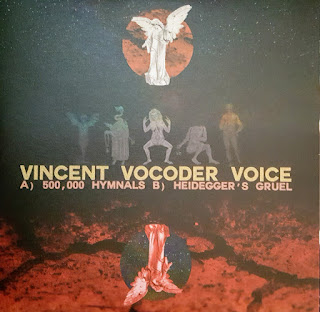 Neil Gardner is a bit of an audio guru, being the brains behind an award winning spoken word production company. But sometimes he likes to retreat from the digital studio to listen to some music analogue style, on vinyl. This time it's a single from Vincent Vocoder Voice...

Side A: dark angry 80s indie goth rock with poetic leanings suffused with discordant piano and an aggressive attitude. Foot stomping anger goes hand in hand with philosophical vocals and a side order of complex lyrics. Makes you think, makes you bop your head, makes you question all sorts of things really.

Side B: noisy messy breakfast of a song. Flat monotonous vocals backed by another slice of early 80s pop rock but where the 1/2 inch tape is wowwing and fluttering all over the shop. There’s a snort of Sigue Sigue Sputnik going on here, which is always welcome. The lack of coherent musical style plays to the band’s advantage giving us an ever-changing pot pourri of tones, themes and currents. Epic ending.