Review - Who's Afraid Of Virginia Woolf 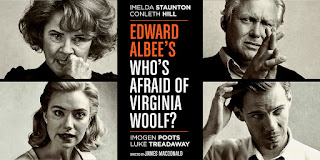 Tony Cross said he was impressed, Martha, as he watched Who's Afraid of Virginia Woolf at the Harold Pinter Theatre...

There are two moments of acting which have absolutely broken me in the theatre. The first was Kate Fleetwood's scream as Lady Macbeth. The second was Imelda Staunton's 'no' that comes at the almost end of 'Who's Afraid of Virginia Woolf'. Both seem to touch a genuine grief and pain that makes theatre a vivid experience.

The fact that Staunton's desperate, quiet cry comes near to the end of a play that has been packed full of spite, rage and verbal cruelty gives it even more impact. The fact that the last scene is so quiet in comparison with what has gone before and so filled with tenderness makes for a powerful ending to a powerful play.

There are only four parts in the play. Two couples. One couple are older, experienced players of games. One couple is younger and learning the ropes. The older couple verbally batter each other but their arguments appear ring-fenced with rules. Rules that outsiders can't possibly understand or cope with but that can trap the unwary. They don't seem to care about hurting each other or others, but that might just be part of the game. After all, when George has given Honey and Nick a taste of the medicine he and Martha have been giving each other and he tells Martha that she did it to him, “so what's the problem?” She says: "But you can take it!"

Martha flirts with Nick. Perhaps more than flirts. Honey gets drunk and ill. George gets even more acidic.

It's a fantastically written play, which is given real power by four exceptional performances. If there is a play on with four better performances I'm damn well going to seek it out.

Staunton’s Martha is bombastically fragile. An emotional firework that fades away. All sound and fury that ends up signifying... something. She's brilliant but she's more than matched by Conleth Hill's George. He's dry, less showy but equally pained. He's cruel. He pokes at weak spots. They appear to be a couple that has nothing but spite left but, as the play develops, we see this isn't true. There's love here but not the obvious love.

Imogen Poots & Luke Treadaway provide support as Honey and Nick. Nick's a man of the make. Honey's his childhood sweetheart. The scene where George tells Honey her own story as if it is fiction is hard to watch. George punishing Martha by being cruel to Honey and Nick.

This is a play you should absolutely go and see if you can get a ticket. The performances match the writing and make this one of the best things I have seen at the theatre.

Who's Afraid of Virginia Woolf runs UNTIL 27 MAY 2017 at HAROLD PINTER THEATRE. For tickets and more info, please visit the official website
Email ThisBlogThis!Share to TwitterShare to Facebook