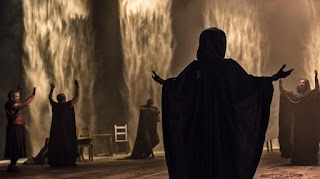 Does Tony Cross demand the head of anyone on a platter after he watched Salomé at the National Theatre...

Salomé is a new play by Yaël Farber, although it has been running in New York in 2016. It’s a new take on the Salomé story. After all, as is pointed out in the programme, the woman in the Bible story has no name.

She has been erased and her story has become the story of a rejected seducer tempting a man of faith. Farber asks what if she was more than this. What if it was she (or should that be She) who in making Herod Antipas bring her the head of John the Baptist lit the touch paper that burst into flames as Christianity. After all, if it wasn’t for the memorable ending John might have died forgotten in a monarch’s prison.

Farber also sees Salomé as the land, as Jerusalem herself. That Arthurian link – or at least that’s how I think of it – between the man and the land.

It should be noted that John is referred to as Iokanaan throughout the play. This is an attempt to give us an authentic looking and sounding Jerusalem, not a Hollywood whitemare. Those of you who read my reviews might have been under the mistaken impression that I’m not a fan of modernised tellings of old stories, but this isn’t true. When it is done well it brings something new to the understanding of a play or story.

So, whilst Farber’s new telling is a feminist and resolutely anti-colonial telling of Salomé’s story it makes it a stronger story. And in its theatrical setting it feels like an ancient text rediscovered. There’s a feeling of Ancient Greek tragedy about it. With its chorus, sung by two singers – Yasmin Levy and Lubana Al Quntar – weaving its way throughout the play.

There’s a real power to this story that I think only comes from a theatre. Of being in the room with actors, not looking at a screen. Of being wrapped up in what’s going on. Of being a part of it in a way one almost never feels when watching a film. Theatre should be about feeling like you’re watching an unrepeatable moment and that, even if you were to see the same play again it wouldn’t be the same play however well-rehearsed it was. There’s always a difference. There are always changes. This felt theatrical in the best sense.

The performances were stonkingly good. Ramzi Choukair’s Iokanaan has real power, even though his dialogue is entirely in…Hebrew(?)* Paul Chahidi is a lecherous serpentine politician trapped by his relationship with Rome. Here represented by Pontius Pilate (Lloyd Hutchinson). Pilate isn’t just Pilate. He’s colonialism incarnate. He’s the fate of Jerusalem under its different conquerors. He’s the representative of real power, which Salomé undercuts through her demand for Iokanaan’s head. Colonialism can only stand the play seems to suggest because the power plays the powerless off against each other. It rewards one man and robs another. It can raise you up and cast you down but if we stand together. If we act as one then we can win. All it needs is a spark and Salomé is that spark.

Isabella Nefar plays Salomé, so-called silently. She is movement. It is Olwen Fouéré who, credited as Nameless, provides the voice. This is a story told a long time after it ended by a woman who despite her lack of name has become the solid foundations of a great City.

I felt by the end that I’d seen something worth seeing. Something about big issues that didn’t let the big issues drown out the individual emotions. I loved it. In writing this review I’ve re-kindled my love for it. Perhaps even more than I did on the night. I want to see it again now. These, of course, are my feelings. You might loathe it. But you’ll only know that if you go and see it, which I recommend.

*Sorry, I’m sure if I were a professional critic I’d have this fact at my finger tips courtesy of the press office but I’m not, so I haven’t.**