Review - It Was Fifty Years Ago Today 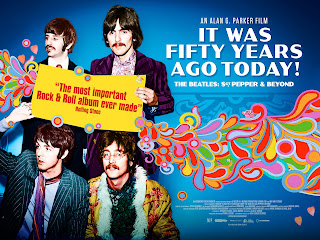 Sit back and let the evening go as Tony Cross watches the 50th anniversary documentary It Was Fifty Years Ago Today! The Beatles: Sgt. Pepper & Beyond...

This is a documentary, directed by Alan G. Parker, with a glaring hole in it. I’m not sure whether that hole is big enough to fill the Albert Hall but it is big enough to sink this documentary. It’s the music. This is a documentary about one of the most influential albums of all time and there’s not a single extract from the album itself, which I’m sure is down to rights and costs but it makes for a frustrating exercise.

Sgt. Pepper emerged out of the Beatles desire to stop touring. They weren’t improving as a band through playing live because they couldn’t hear themselves play and they couldn’t play much from their previous two (and in my opinion equally envelope pushing) albums: Rubber Soul and Revolver live. Combined with the hassle of touring, which had included being roughed up in Manilla for snubbing an Imelda Marcos party and the controversy around John Lennon’s ‘bigger than Jesus’ comments. This was to leave their manager, Brian Epstein, a little lost.

Indeed, this documentary is – indirectly – as much about the distance that grew between Epstein and the Beatles as it is about Sgt Pepper.

Parker does an excellent job of setting this all up. The interviews are mostly with people who were involved with the Beatles but not with the music, which is fine. It’s nice to hear from them but the glaring absence of musicians and music is an issue.

I am aware that I’m probably missing the point entirely and that Parker’s purpose is purely to make a documentary that tells the story of Sgt. Pepper from a personal and social point of view and leaves the musical side of things to other people, which is fine. It does a job. But Sgt Pepper is the music. All the stuff that surrounds it, important though it is, means nothing without the music.

We have become experts and drowning out music by trying so hard to put everything into boxes. We contextualise things to death. Like analysing comedy in taking a scalpel to a joke we kill the joke. Like slicing up a frog in biology class.

As this is a Beatles documentary we, of course, must have the discussion about which is the key Beatle (even though it isn’t quite positioned like this.) As usual George and Ringo get shoved to the side whilst Lennon and McCartney slug it out for pre-eminence. Who was the one really into the avant garde? Who did LSD first? Who was the bestest Beatle. This, in the end, doesn’t matter a jot. The four of them made the Beatles. Lennon and McCartney were never better than they were as Beatles and you could argue they spent their solo careers trying to replace each other and never quite managed it.

It’s all fine. It’s just not quite the documentary Sgt. Pepper’s Lonely Hearts Club Band deserves but if you know nothing about the world into which it came or how it came about this isn’t a bad starting point but it never quite recovers from the musical silence.

IT WAS FIFTY YEARS AGO TODAY! THE BEATLES: SGT. PEPPER & BEYOND in UK cinemas 26th May, including special Q&A previews across the UK, followed by its release on Digital 1st June and DVD 5th June.