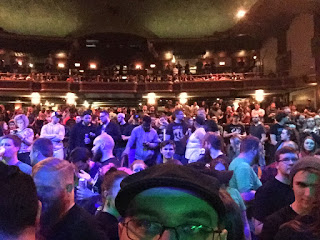 Anyone who knows me or has read any of my music articles from these websites knows that I have an undying obsession with Coheed and Cambria. Ever since I heard their second album, In Keeping Secrets of Silent Earth: 3, I have been a loyal and vehement fan. My left arm is covered in a sleeve of tattoos all dedicated to the band in question and I have seen them damn near twenty times in concert. There are numerous aspects which have ensured my undying devotion to this group: amazing songwriting, unique style, interesting and thought-provoking lyrics, etc. but one major aspect is the concept that permeates all but one of their albums. There is an epic sci-fi opera style story which coincides with all but the band’s last album. Each previous record is a separate chapter detailing the story, something I can’t even begin to explain here, and it adds another incredible dimension to an already impressive band.

In October of 2008, to the delight of fans everywhere, Coheed and Cambria put on a series of shows they called Neverender (the title being pulled from a song off of their first album) in which they played all of their albums (four at this time) in their entirety. One album each night, four nights in a row and then toured to four different cities. The first of these city visits was at New York City’s Terminal 5 and was subsequently released on DVD. These shows became something of an obsession for fans who were truly into all aspects of the band. Not only did the show provide incredible visuals and an always great performance—they also offered fans the chance to see live performances of songs that they would never otherwise get the chance to hear in a live setting.

After the Neverender, there was push from fans to do the same but in an actual tour format. Therefore, in 2011, ten years after the release of their first album Second Stage Turbine Blade, the band embarked on a tour they called An Evening with Coheed and Cambria. At this show the band came out and performed 7-9 songs in an acoustic format, came back after a short break to play SSTB in its entirety, and then returned finally for a set of 7-8 songs from their other albums. The show was INCREDIBLE.

After the success of the first Neverender tour, in 2014 they did the same with their sophomore album, In Keeping Secrets of Silent Earth: 3. The show featured openers this time and it was a transcendent experience for me because I was able to hear “The Light and the Glass” live. It is an amazing song and you should listen to it right now…

Naturally, the band progressed, released new albums along the way and went on more tours but the fan base, myself included, wondered whether they would or could continue their streak of Neverender shows with a visit to their third and most successful album, the epically titled Good Apollo, I’m Burning Star IV: Volume One: From Fear Through the Eyes of Madness. It is sweeping in sound and scope and is easily the most progressive work they have recorded to date. 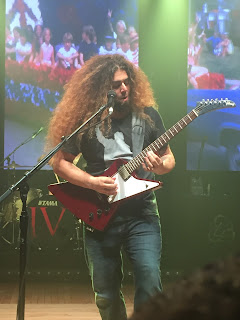 Luckily for all of us, in early 2017 the band released the tour dates for the Good Apollo Neverender and I was so full of anticipation that I could barely contain my excitement. I ordered my tickets less than a minute after they were on sale and waited, less than patiently, for May 11th, when I would make the four-hour trek north to Royal Oak, Michigan and bask in the glory that is Coheed and Cambria. Once the day arrived and the drive was finished, I made my way to the venue, four hours early, and proceeded to camp outside the venue with multiple members of the ever-growing facebook group called Coheed and Cambria Fans. We had some laughs, watched a member nearly die while attempting to consume some of BW3’s unbelievably hot wings (we all had a good laugh).

I purchased a specialty package and was given early entry and an acoustic song by the band before the show actually begun. What followed was an amazing performance of Leonard Cohen’s “There is War.” Afterward they asked the crowd if anyone had known the song prior to the performance and only myself and two other people did. In fact, Travis Stever, the guitar player, called me out about it and I told him my dad listened to it a lot when I was younger (it’s true Travis, I promise). Then the band said thank you and receded into the back while the amazing performance of openers The Dear Hunter set the stage for the level of enjoyment I would have at the show. I will review The Dear Hunter shortly. Suffice it to say that their show was incredible and then I settled in for a show I had been anticipating for damn near a decade.

The show began with three huge screens flashing symbols in black and white while the instrumental opening track “Keeping the Blade” began. As soon as that song faded, out walked Claudio Sanchez with his Taylor Acoustic and he went straight into “Always and Never,” a beautiful lullaby-like song which every single person in the Royal Oak Music Theater sang. I could scarcely hear Sanchez’s voice but it didn’t matter. That is the beauty of a Coheed concert—it is less a show and more an experience.

After always and never subsided, the rest of the band emerged and Claudio donned his double-neck Gibson for their most successful song to date: “Welcome Home” (which was featured on Rock Band). This song is heavy and angry and provided the first of many guitar solos for Claudio Sanchez and Travis Stever. This song very simply rocks. It has elements of Led Zeppelin but is also a grand example of the power Coheed can wield. It also provided the first of many sing along chants for the crowd. 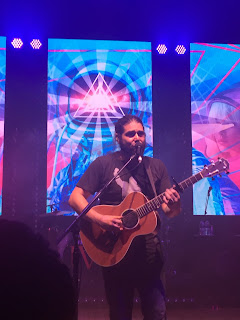 From here, the band powered through “Ten Speed (Of God’s Blood and Burial),” and “Crossing the Frame,” all with more than their usual gusto and with nonstop participation from the crowd. I was at the front and center and screaming every word, along with a sold out, 1700-person audience. This led into my favorite song off of the album, “Apollo I: The Writing Writer.” The music began and the half-time, jumpy rhythm and bass provided by the powerhouse duo of Zach Cooper on Bass and Josh Eppard on drums.

Once again, the band continued their onslaught crushing fan favorites “Once Upon Your Dead Body” (with an amazing section of the entire crowd jumping and singing “I hope you die right now, will you drink my chemical) and the slow and lovely “Wake Up,” before moving into the second single from the album: “The Suffering.” This is probably the band’s second most famous song and it was delivered with so much energy that I thought the place would tumble down around me.

After “The Suffering” the band played two more incredible songs, “The Lying Lies & Dirty Secrets of Miss Erica Court” and “Miss May I,” two poppy pieces that pave the way for the epic finish to the album. The next was the most anticipated moment of the show for me. What followed next was the unbelievably long and progressive Willing Well Series, a cadre of songs which lasts near to a half-hour, almost half of the album. These songs are full of twists and turns, some repeating parts which harken back to earlier songs and even earlier albums. If you ever want to listen to something incredibly musical and emotional, do yourself a favor and listen to the Willing Wells. They were received better than any of the other songs this evening, minus one, and were the height of the show for me.

The original set ended with “The Willing Well IV: The Final Cut” which is a sad, angry, bluesy song that is the perfect ending to the album. The lyrics only last for a minute or so but they chorus is powerful and emotional. Sanchez let the crowd sing “This is no beginning, this is the final cut!” before delving into duelling guitar solos between himself and Stever again. Also, in this extended version, Cooper and Eppard were also given the spotlight to jam and solo before kicking back into the main riff of “The Final Cut” and ending the show.

Through screams and chants of Coheed, the band took a break but emerged for three more songs. This was also the first time that Sanchez had said anything to the crowd. Always somewhat reticent to speak as he is pretty shy, he regaled the crowd with a story about the best Chinese food he’s ever eaten before jumping into “Island” from their eighth album, The Color Before the Sun. After, the went immediately into fan favorite “Delirium Trigger” from their first record. This song builds and is one of Coheed’s heaviest. With the crowd singing “Oh Dear God I don’t feel alive!” the band finished out this song before ending with the most epic live song in the existence of music (I’m not being hyperbolic either).

As the beginning notes of “In Keeping Secrets of Silent Earth: 3” began, the crowd lost their minds. The song is probably the favorite of all fans when done live because of the epic ending. If you get a chance check that song out as well. It is over eight minutes long but incredible and the ending gives me goosebumps every time I hear it. The chant at the end was so loud that I couldn’t even hear the music and Sanchez simply pointed to the sky while every person in the venue shouted, “Man your own jackhammer! Man your battle stations!” As they hit the final note and said thank you to the crowd, I looked around at the many, many smiles and the faces of contentment surrounding me.

Coheed is truly a fan’s band which is evident if you have ever seen them on a headlining show. They care so much about their fans and about what they are doing and having met them all multiple times, I can say they are some of the most genuine, down-to-earth people on the planet. You are doing yourself a disservice if you don’t see them at least once in your life.