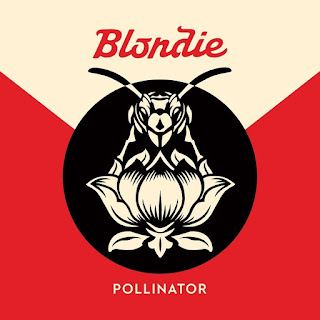 Susan Omand dresses in a black bin liner and listens to the new album from Blondie, Pollinator...

Before you ask, yes I did actually go to a school disco dressed in a taped up black bin liner once. Yes, intentionally. Although my hair was blue at the time, so that’s obviously why I got laughed at and not because I looked like a nerdy, speccy, awkward teen trying too hard to be cool in a bin bag...

Anyway, Blondie. I hate to admit it but I don’t actually own a whole album of just Blondie, although I have all the big hits on various compilation albums and I still enjoy listening to them. However, her solo single from a couple of years back, Maria, really got on my nerves me with its tubular bell dingy-ness. So it was with some trepidation that I approached the new album.

Well, apart from expecting Plastique Bertrand to start singing Ca Plein Pour Moi after that brilliantly manic drum intro on the first track on the album, Doom or Destiny, which incidentally features Joan Jett, the first three songs are pretty much the Blondie of old - classic driving backline, strong melodies and that distinctive voice. In fact, track 2, Long Time, could well be Heart of Glass if you’re not listening carefully and Already Naked sounded very like The Pretenders in bits which is no bad thing. Then we get to track 4, Fun. Do you remember Kylie’s Confide in Me? That. That’s all I can hear. The squeaky breathy voice and pure disco sugar-pop – what happened to the edgy punk goddess that I aspired to be all those years ago? Things get a bit better with My Monster, where we’re back to a later, more polished, but still classic Blondie sound. Best Day Ever is next and is incredibly catchy, so much so I found myself singing along on only the second listen (luckily nobody was around and the wineglass didn’t break). Then Gravity surprised me. No, not the earthly phenomenon, nor anything to do with emptying the wineglass, it’s the next track on the album. It’s very electronic and her voice has had massive, but intentional distortion, including serious echo reverb if you listen through headphones but on that track it really works. Much less so on the next song though, where she sounds like Dolly Parton on helium. Ironically for a country ballad called When I Gave Up On You, I gave up on it and skipped to the next song. And I LOVED Love Level, at least for a start. I could even forgive the return of the Kylie-esque vocals because the percussion is so interesting and the brassiness in that intro is just sublime. From the sublime to the ridiculous though and the few lines of rap shoe-horned into it, which will NEVER be as cool as the genius car-themed rap in Atomic. Really just shouldn’t have bothered. Talking of which, Too Much. Too Much is the second last track on the album and is really anything but Too Much. Meh. Run of the mill, ho hum, forgettable pop.

Which brings me to the final song on the 11 track album, Fragments, which spawned a discussion on Twitter with fellow reviewer and music aficionado R J Bayley, who said Debbie Harry should record a Bond theme and, from even just the intro, I can really see what he means. Put a full John Barry style orchestration behind and it has a superb timeless quality that would work so well over some classic 007 credits – all very Shirley Bassey. Then, just as you’re luxuriating in the unctuousness of it all, the drums kick in and the tempo suddenly shifts up several gears til you’re pogoing, in your sequinned evening gown, and it is SUPERB. Definitely my favourite track on the album, so much so, I went digging to find out who wrote it. Turns out it is a cover of a song by Vancouver artist Adam Johnson of An Unkindness. Dig out the original and listen to it, it’s a song that drew me down a rabbit hole of his other work, but that is for another day.

Final verdict on Pollinator then? Loved Fragments, Best Day Ever, Gravity and Doom or Destiny. Loved a bit of Love Level, gave up on When I Gave Up on You, found that Fun wasn’t and Too Much was not enough. And as for the rest, they took me back to standing freezing in the school canteen on disco night, with blue hair and a black bin bag dress. Not bad at all then.