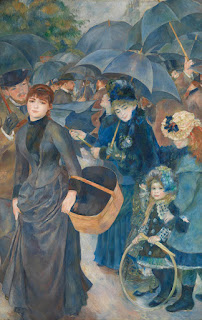 The Umbrellas by Pierre-Auguste Renoir in about 1881-6

Renoir's 'Umbrellas' shows a bustling Paris street in the rain. The composition of the painting does not focus on the centre of the picture which is a tangle of hands. It even cuts off figures at either edge like a photographic snapshot. This kind of unconventional arrangement was something that several of the Impressionists, including Renoir and Degas, enjoyed experimenting with.

The work is particularly intriguing in that it shows the artist at two separate points in his career, the second of which was a moment of crisis as he fundamentally reconsidered his painting style.

When he began 'The Umbrellas' in 1880-1, Renoir was still using the typically loose brushwork and bright, pure colours of the Impressionist movement - the sort of technique he employed in 'The Skiff (La Yole)'. During the early 1880s, he became increasingly disillusioned with the Impressionist technique.

He began to look back to more traditional art: the drawings of Ingres and the 'purity and grandeur' of classical art. Returning to 'The Umbrellas', he repainted the figure on the left in a crisper style, using a more muted palette. The rapid changes in women's fashions allow us to date the second stage of the painting to 1885-6. 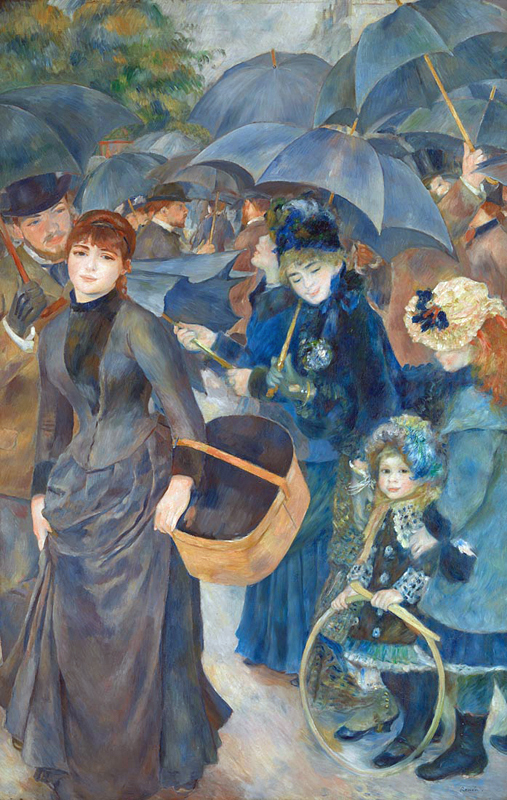 The “breaking of the fourth wall” to use a theatrical term as two of the faces look directly out of the canvas whereas the others in the crowd seem to be oblivious to the observer.

The girl with the empty basket is an interesting and well-executed character with fine features and a story behind her eyes. I also like the texture of her dress material and can see the weight of the fabric.

A lot! It’s very busy but at the same time manages to be chocolate-box bland and very twee. Apart from the girl with the basket I don’t care about any of the other characters and don’t want to find out more about them. The colours are muddy, there’s no flow or ordered composition to it and there’s that weird disembodied foot being framed by the child’s hoop. Who does that belong to?!

No – it annoys me and not in an enjoyable way.