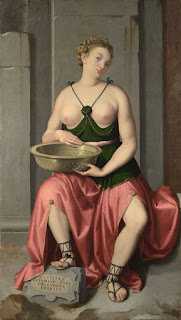 The Vestal Virgin Tuccia by Giovanni Battista Moroni in about 1555

The painting is unusual among Moroni's secular paintings - the others which survive are portraits. It may be intended as a personification of Chastity but also represents the Roman priestess of Vesta, Tuccia, who proved her virginity by miraculously carrying water in a sieve (the line of the water here is just above the holes) and may have been one of a series of paintings of ancient heroines.

The inscription, which may be translated 'Chastity emerges from the dark clouds of Infamy', is adapted from Valerius Maximus, the ancient Roman author who tells the story of Tuccia. The painting is likely to date from about 1560. There’s a real strength and robustness to the woman that suggests a peasant worker but this belies the elegance of her hands, the paleness of her skin and the expensive nature of her clothing and hair adornments which would be more akin to someone of the aristocracy not used to work. I also find the plainness of the background interesting as it doesn’t add to the backstory of the painting as one would expect in portraits which, in itself, tells a story.

I like the “reality” of the woman. She’s not artificially beautified or stylised in any way, she has lumps and bumps like the rest of us and it doesn’t feel too posed. The folds of the cloth are beautifully realised too.

For all the detail in the rest of the portrait, I find the face very flat and bland with no character. I also don’t see the point of the inscription, it feels very much added as an afterthought to fill a gap. And feet are always awkward looking.

Yes, its contradictions fascinate me.