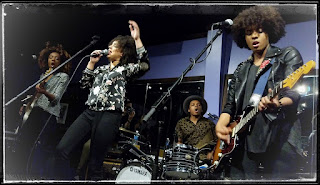 Nate McKenzie shows a lot of respect for The New Respects...

If you haven't heard of The New Respects yet, that's ok.

After all, they only just formed about five years ago, and the members, obviously naturally gifted, began playing their current instruments as recently as one year ago. But once you've heard their music, either recordings or live, you could be forgiven for thinking that this band has been around for years. They may be new but The New Respects are anything but amateur.

Lead singer Jasmine Mullen is the daughter of Gospel legend Nicole C. Mullen and the cousin of Respects' drummer Darius Fitzgerald and his twin sisters Lexi (bass) and Zandy Fitzgerald (lead guitar). All four have grown up in the talent-rich atmosphere of Nashville. Even so, options for music in the Fitzgerald household came down to either Gospel or Motown and although those genres are the foundation for their sound, other influences are present and apparent.

From the funky drum-and-bass-driven Money to the old-school R&B/Gospel style ballad Come As You Are to Shoes which has a Florence and the Machine energy to it, their music bridges gaps that most bands are afraid to attempt traversing.

The track Frightening Lightning from their debut EP Here Comes Trouble pulses like the sounds of Alabama Shakes, Lenny Kravitz, and Fitz and the Tantrums were blended together on max setting, while still sounding fresh and original. Even with obvious influences, it would be a mistake to typecast The New Respects.

The band initially wasn't even interested in playing music. Growing up in close proximity to the industry doesn't lend to the same shimmering glow that a musician in, say, rural Idaho grows up envisioning. When they did decide to head down that road, the first iteration of this quartet was in the form of a Folk band. "We played mandolins and banjos", Zandy told me after their performance last Sunday night. "We wanted to be the black Mumford and Sons. But it just wasn't working."

Their reinvention has served well. (Although I am extremely interested to hear any sampling that previous venture produced)

With infectious hooks and lyrics that crawl into your brain and refuse to leave, one listen is all it takes to become a rabid fan.

Zandy told me that she and Jasmine do most of the songwriting. Jasmine added, "What's weird is that we will look back on a song and realize 'oh, that's where that came from'. We'll discover the inspiration for it after it's finished."

That natural flow of creativity comes through in their music, giving it a near ethereal vibe, creating a deeper sense of connection between song and listener, even unto themselves as curators.


What stood out to me about The New Respects show was how universal their music is.

As I stood in the back of the wine and craft beer bar, and now burgeoning music venue, Vino Bellissimo, I couldn't believe that something like this was happening in Lima, Ohio. Labelive, a promotion company based in Nashville, saw fit to usher The New Respects 400 miles north to introduce them to a crowd of less than two-hundred, comprised mostly of white, middle-aged couples.

That might not seem significant to someone outside of Lima, but to this guy who has lived in Lima his entire life, it most certainly is. If you consider that the band recently came off a stint opening for Blues-Rock powerhouse Robert Randolph and the Family Band and are in Texas for Rock the Ranch today then in Alabama on the 21st for Hangout Music Festival, it's huge.

To quote my girlfriend after the show:

"I am completely blown away by the fact that something so amazing occurred in Lima, let alone the fact that I was there to witness it."

In a recent interview with NPR.org, bassist Lexi said, "Our music isn't set up to be a specific idea of something, but freedom — freedom and fun and family. Wherever that will be welcome, that's where we want to go."

The New Respects will be going anywhere and everywhere they want.