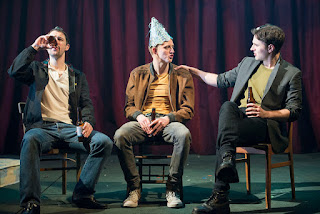 The stage adaptation of Trainspotting returns to the theatre where it all began...

Irvine Welsh’s Trainspotting began its life as a piece of drama at the Citizens Theatre in Glasgow over 20 years ago and returned in 2016 with a critically-acclaimed sold-out run. Hot on the heels of Trainspotting 2, Danny Boyle’s sequel to his phenomenally successful film version, and by popular public demand, the Citizens Theatre is bringing its production of the notorious story back to the stage from 18 October to 11 November 2017. The production will also tour to the King’s Theatre Edinburgh on 14 to 18 November, presented by Selladoor Scotland.

Trainspotting was first presented in a stage adaptation by Harry Gibson in the theatre’s Stalls Studio in 1994, just a year after the book’s publication. The shocking and explicit production was hugely successful and was quickly remounted in the theatre’s larger Circle Studio. The adaptation has since been staged across the globe. In 2007, The Scotsman named the Citizens Theatre’s original production in the Top 20 Scottish Theatre Events of All Time, stating “it’s a show that comes with a health warning”.

Trainspotting is set in Thatcher-era Leith, in a world where work and opportunities are scarce. The trappings of a successful lifestyle are held out of reach of Renton, Begbie, Sickboy and Spud, who instead look for fulfilment through the point of a needle.

Gareth Nicholls returns to the Citizens Theatre to direct. Nicholls’ recent credits include God of Carnage (Tron Theatre) and The Burial at Thebes, Coriolanus and ‘Tis Pity She’s A Whore (Royal Conservatoire of Scotland). Of his return to the Citizens Theatre, Gareth commented, “Irvine Welsh’s urgent and uncompromising story clearly still packs a punch – we saw audiences from all backgrounds connecting strongly to its heady mix of humour, heartache and heroin. Its unflinching look at Scottish identity, masculinity and choice seems to be as pertinent now as it was 24 years ago and I’m thrilled to be once more bringing this raw, energetic and iconic modern classic back to the stage.”

Tickets for the King’s Theatre Edinburgh go on general sale today. Tickets available from edtheatres.com or 0131 529 6000.

Photo by Tim Morozzo for Citizen's Theatre
Email ThisBlogThis!Share to TwitterShare to Facebook