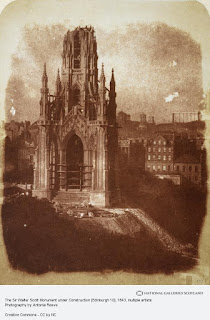 Pioneering photographers Hill and Adamson produced a remarkable body of work just four years after the invention of photography was announced to the world. An exhibition, opening this weekend, and three short films from The Scottish National Portrait Gallery explain more...

In an exhibition opening this weekend, the Scottish National Portrait Gallery will explore the captivating images produced by the unique partnership of Scottish photographic pioneers David Octavius Hill (1802-1870) and Robert Adamson (1821-1848). A Perfect Chemistry will comprise over 100 photographic works dating from just four short years in the 1840s, when these two men changed the path of photography and created a remarkable body of work that has had an unparalleled impact on the medium. This will be the first time in 15 years that these treasured photographs will have been the subject of a large exhibition in the UK.

The artistic partnership between the painter Hill and the engineer Adamson was remarkable in many respects: only four years after the invention of photography was announced to the world in 1839, the Scottish pair had not only mastered and improved upon the new medium, but were producing breathtaking works in extraordinary quantities. Their innovative images appear surprisingly fresh even today and their subjects range from intimate portraits to beautiful cityscapes that document the urbanisation of the Scottish capital. A Perfect Chemistry will also feature fascinating images of the Newhaven fisherfolk which form one of the most significant groups within Hill and Adamson’s oeuvre; these outstanding photographs belie the technical challenges faced by the duo and are arguably among the first examples of social documentary images in the history of photography.

The meeting between Hill and Adamson was precipitated by a polarizing religious dispute: on 18 May 1843 a group of ministers walked out of the Church of Scotland’s annual General Assembly in Edinburgh and officially established the Free Church of Scotland. The event rocked the nation and political status quo, sending reverberations around the world. Hill was so moved by the ministers standing up for their beliefs that he decided to commemorate the event in a large-scale painting representing all 400 of them. He turned to Adamson, 19 years his junior, as the first and only professional calotypist in Edinburgh, to photograph the sitters as preliminary sketches for his grand painting.

Hill quickly became smitten by the new art form and within weeks of meeting, the two men entered into a partnership and began making photographs together. Within a matter of months their works were featured in exhibitions and receiving critical acclaim, often being compared to Rembrandt’s etchings due to the strong chiaroscuro (or contrasting dark and light) quality of the prints. 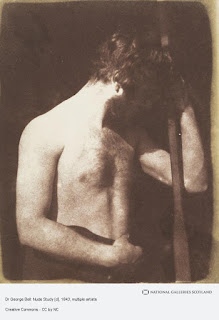 Ironically, Hill had approached photography as a means to expedite his painting yet it took him 23 years to finish his large commemorative canvas: The First General Assembly of the Free Church of Scotland; Signing Act of Separation and Deed of Demission (1843-66).The imposing picture was ultimately sold to the Free Church of Scotland and it continues to hang today in their headquarters in Edinburgh.

The success of Hill and Adamson’s partnership relied on professional alchemy as well as personal affinity, with both men working and living in Rock House, a landmark building located on Edinburgh’s Calton Hill. Since making calotypes required natural sunlight, the photographers used the house’s south-facing garden as their studio, employing a series of props and several different backgrounds for their outdoor images.

These portraits made at Rock House represent a real ‘who’s who’ of Edinburgh’s society and illustrate the vibrancy of the capital’s cultural life in the 1840s; eminent sitters ranged from the artist Sir David Allan, to Isabella Burns Begg, the sister of poet Robert Burns, and the inventor of chloroform James Young Simpson. A string of foreign sitters also attested to the international nature of the capital at this time.

Hill’s artistry gave him an eye for composition, evident in an intriguing portrait of Lady Ruthven, whom he posed with her back to the camera to exploit the intricate lace detailing of her shawl against her dress. The image reads as a metaphor for photography itself: the negative and positive image captured on paper. Adamson appeared to push the boundaries of photography—demonstrating skills few possessed at such an early period in the history of the art form. To create calotypes the photographers dealt with a complex process of applying light-sensitive chemical solutions to paper in order to create the images. The steps involved were cumbersome and variable, yet the consistently high quality of the prints indicate they had perfected the process and mastered the fickle chemistry of early photography. 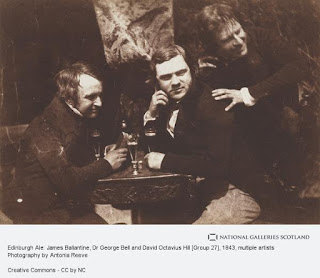 The exhibition also will reveal how Hill and Adamson made clever use of stylistic and practical devices when creating their pictures. Books not only suggested the sitter was educated, but the white pages allowed light to bounce back on the subject (at a time when there were no studio lights), while the actual object would keep the sitters’ fidgety hands occupied for the duration of the exposure. Poses were held anywhere from 30 seconds to several minutes depending on the available sunlight, and any fidgeting during that time would result in a blurred image. The resulting photographs nevertheless display remarkable vitality, and in some, carry the sense of spontaneity of a modern snapshot like in the group portrait Edinburgh Ale where the sitters exhibit relaxed poses and faint smiles.

Hill and Adamson also captured the fisherfolk of nearby Newhaven. The men and women of the village were known throughout Edinburgh and beyond for their distinctive costumes, and their reputation for bravery had made them a part of popular culture in the nineteenth century, even featuring as characters in novels by Sir Walter Scott. With the limitations of the medium, the photographers could not capture the boats at sea and interestingly some of their most iconic works from the series, depict the men beside their beached boats or tending to their fishing lines ashore. These shoots were not a casual day out at the shore; in order to record these subjects the two men had to transport all their cumbersome equipment (wooden box cameras, tripods, paper, and support stands) to the site. Such complex requirements didn’t stop Hill and Adamson from travelling around Scotland—Glasgow, Linlithgow and St Andrews — and even as far afield as Durham and York in England. The Newhaven images are rare examples of social documentary photography and a selection of the Newhaven photographs was shown at the Great Exhibition at the Crystal Palace in London in 1851; an early indication of the importance of the partnership to the history of photography.

The untimely death of Adamson on 14 January 1848, at the age of 26, marked the end of this unparalleled partnership, but their legacy continues. The fact that the photographs continue to delight is indicative of the special chemistry shared by these two Scottish pioneers. The last exhibition of this scale of Hill and Adamson’s fragile works was Facing the Light at the Scottish National Portrait Gallery in 2002.

The first short film is about Place and looks at the role that the city of Edinburgh played in their work.


The second short film, People, looks at their portraiture work focusing on their process and people who sat before their camera.


And the third short film looks at Hill and Adamson themselves and how these two men from different backgrounds came to form such a creative partnership.

Find out more about Hill and Adamson

An exhibition of their work runs from today to 1 October 2017 at the Scottish National Portrait Gallery as part of Edinburgh Art Festival.