News - Music for the gift at Venice Biennale 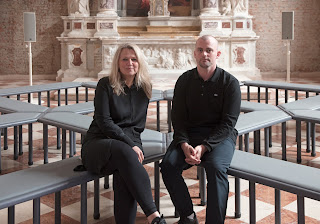 
Cardiff-born Richards’ interest lies in the possibility of the private amidst the public chaos of quotidian media. His work makes use of an ever-growing bank of material that includes fragments of cinema, works by other artists, stray camcorder footage, murky late night TV, film soundtracks and archival research. Means of producing and displaying images are central to Richards’ methodology and he unpacks the image as both subject and object, unfolding ways in which fragments of the present can connect with those of the past, the hidden with the visible, and the sentient with the body. Drawing on cultural as well as visceral qualities within his materials, Richards’ work sets up striking elliptical interplays of sound, moving and still image that create a reflective space of extraordinary intensity. 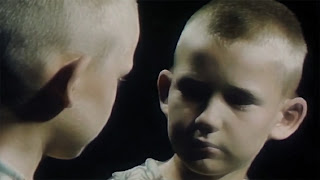 Richards’ presentation for Cymru yn Fenis Wales in Venice is a new body of work including a sound installation, video and photographic works, inspired by the space of the Santa Maria Ausiliatrice and the artist’s ongoing exploration of the emotive power of appropriated material. It includes ‘Migratory motor complex’ (2017), a new, six-channel electro-acoustic music installation. The work is an exploration of the capacity of sound to render artificial acoustic spaces and then locate sonic and melodic events within these. The work shifts around the viewer setting up and then shattering these imaginary settings. Woven throughout the piece are re-occurring vocal and musical motifs that have been developed in collaboration with Kirsten Evans and Samuel Williams, students at the Royal Welsh College of Music and Drama. The work has then been ‘tuned to the room’, with Richards reacting to the acoustic contingencies and associative qualities of the building as he constructs a poetic audio-collage. Moving across a wide range of genres and musical languages, the artist incorporates field recording, sound effects and his own voice, alongside electronically generated and recorded material. The resultant work is a cinematic and multisensory experience – an arrangement of vivid emotional cues to be navigated subjectively. 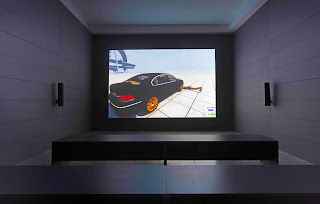 ‘What weakens the flesh is the flesh itself’ (2017) is a video made with collaborator Steve Reinke. The starting point for the work is a series of images found in the private archive of Albrecht Becker — a production designer, photographer and actor imprisoned by the Nazis for being homosexual. Amongst pictures of friends and photographs taken whilst serving in World War II is a collection of staged self-portraits that reveal an obsessive commitment to body modification, tattooing and his own image: duplicated, repeated and reworked with collage and darkroom revision. This extraordinary collection of images serves as the backbone for the video, an extended meditation on the archive, photography and the body. The double self-portrait is redoubled, repeatedly — a mise en abyme; the self is lost as the flesh proliferates, escaping death, returning as a thin image resonant with desire and possibility. 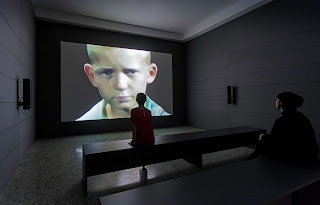 ‘Rushes Minotaur’ (2017) is an installation of inkjet prints that draws on two distinct images: a close-up of crumbling skin from a medical book and the tarpaulin-shielded façade of a shop. Cut together and then rescanned, these simple visual cues and combinations of found photocopied images are disrupted and reinstated through a scanning process that stretches and stacks them in to different combinations; subject matter appears to fall away, refracted and recalibrated; the image itself is fragile – on the verge of being lost or damaged or re-appropriated elsewhere.

Present throughout the exhibition is a publication of deceptive economy that contains an expansive text by the writer Chris McCormack. The narrative moves between the intimate and the scientific, and reflects upon the breaking of the male voice. The subject has been a point of dialogue between the two collaborators for a number of years and was commissioned after Richards spent time in the Santa Maria Ausiliatrice, where McCormack’s words began to chime. Moving fluently between first and third person the text meets Richards’ exhibition at an oblique angle, like his images that oscillate between unfettered documentary and a more neurotic interior territory.

Hannah Firth, Director of Visual Art, Chapter and curator of Cymru yn Fenis Wales in Venice 2017 commented: ‘James Richards is one of the most original and exciting artists of his generation and we are delighted to be working with him on this ambitious new commission in Venice.’

Phil George, Chair of Arts Council of Wales said: ‘Arts Council of Wales is delighted to be presenting James Richards at the Venice Biennale in 2017. James is an exciting and significant Welsh artist who has a growing reputation in Europe and beyond. As such, he is the perfect choice to represent our country at such a prestigious international Biennale.’

Watch as Artist James Richards introduces his Cymru Yn Fenis Wales in Venice exhibition, 'Music for the gift' at the Biennale Arte 2017 in Venice.

The exhibition is commissioned by the Arts Council of Wales and curated by Chapter, Cardiff. The exhibition will be presented for the fourth time at the Santa Maria Ausiliatrice, a church and former convent located just off Via Garibaldi, situated midway between the main Biennale Giardini and Arsenale sites, 13 May – 26 November 2017 (preview 10, 11 & 12 May), and is free to visit.

In a unique partnership, the 2017 exhibitions for Wales in Venice and Scotland + Venice will both be shown in Wales and Scotland following their presentation at the 57th International Art Exhibition – La Biennale di Venezia. With support from Art Fund, James Richards: Music for the gift will be exhibited at Chapter, Cardiff (June – September 2018) and Collective, Edinburgh (January - March 2019) and Rachel Maclean: Spite Your Face will be exhibited at Talbot Rice Gallery, Edinburgh (February – April 2018) and at Chapter (October 2018 – January 2019).