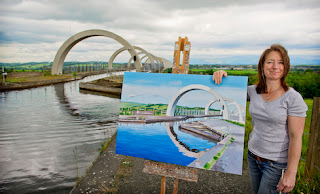 Scotland’s first-ever canal artist-in-residence, Lesley Banks (no jokes about canal Banks btw), has captured the spectacular sights of the nation’s inland waterways on canvas and is inviting the public to go ‘gongoozling’ as the first exhibition of her work opens tomorrow at the Park Gallery in Falkirk.

Entitled ‘Gongoozler’ – a term for someone who takes joy from watching the world, and one or two boats, pass by on canals – the exhibition marks the culmination of a 15-month residency that saw artist Lesley Banks travel the Forth & Clyde, Union, Monkland, Caledonian and Crinan Canals creating paintings that celebrate the environments and stories of Scotland’s 250-year-old waterways. The exhibition will run until 25 June.

The residency, funded by the National Lottery through Creative Scotland Open Project Funding and supported by Falkirk Community Trust and Scottish Canals, has resulted in the creation of more than 40 paintings of the nation’s canals, covering everything from The Falkirk Wheel to Neptune’s Staircase, The Kelpies, and even the few remaining sections of the Monkland Canal.

Lesley Banks, Scottish Canals’ artist-in-residence, said: "From the water to the banks and beyond, Scotland’s canals are unique environments with over two centuries of stories to tell and I feel very lucky to be Scottish Canals’ first artist-in-residence. I’ve spent the past year gongoozling, using the towpaths as a studio and capturing some incredible sights on the waterways throughout changing seasons, weather and times of day.

“The Gongoozler exhibition is the culmination of that experience and celebrates the unique character of each canal, from the majestic Caledonian to the post-industrial Forth & Clyde, in a sequential form that will allow people to explore the waterways on canvas as if they were walking the towpath with me.”

Richard Millar, Director of Infrastructure at Scottish Canals, added “From Neptune’s Staircase to The Falkirk Wheel and The Kelpies, Scotland’s canals have been associated with innovative art and engineering for more than 200 years. Lesley’s project has helped celebrate that rich heritage and the vital role the waterways play in the communities that line their banks by committing their iconic sights and stories to canvas – many for the first time. We’re delighted with the results of the residency and hope that seeing the incredible scenery of Scotland’s canals during the exhibition will encourage even more to people to explore the waterways by boot, boat and bike and experience them in person.”


Born in 1962, Lesley Banks grew up in Denny, Stirlingshire. In 1980 she began a four year Degree course at Glasgow School of Art specialising in Drawing and Painting. After graduating she travelled and painted throughout Europe funded by an Elizabeth Greenshields Scholarship.

In 1988 she became a gallery assistant in the Compass Gallery, Glasgow. Here, encouraged by Cyril and Jill Gerber, Lesley began to exhibit more of her artworks winning various prizes and awards, such as The 1991 Scottish Prize, Royal Overseas League London. This gave her the confidence to concentrate on painting full-time.

In 1999 Lesley was appointed 'Artist in Residence' at Edinburgh Zoo where her popular "Urban Zoo" exhibition gained funding from the Scottish Arts Council.

Since this time Lesley has exhibited throughout the U.K. and even as far afield as Singapore and the U.S.A. Lesley had a very successful 2009 Park Gallery exhibition called 25 years of Painting, which was part of the year of Homecoming programme.

In spite of a lifelong love of Italy, a country reflected in some of her more recent works, Lesley continues to live and work in Glasgow with her partner and three sons.

See www.lesleybanks.com/ for more information on Lesley and her work.

The Gongoozler exhibition will take place from Saturday 6 May until Sunday 25 June at the Park Gallery at Callendar House, Callendar Park, Falkirk. More information is available at www.falkirkcommunitytrust.org/venues/park-gallery
Email ThisBlogThis!Share to TwitterShare to Facebook