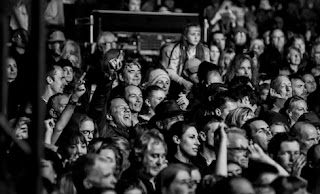 L'entent cordiale is as strong as ever as the Scottish programme is launched at Festival Interceltique de Lorient, Europe’s largest Celtic music festival in Brittany, France...

The Festival, which is set attract an audience of 750,000 from 4 - 13 August, offers an unprecedented opportunity to highlight the diversity and quality of Scotland’s finest musical talent on the international stage.

The largest showcase for traditional Scottish music in mainland Europe, the festival will see over 180 Scottish performances, events and activities taking place across 11 days. The Gala Opening Concert will feature an all-Scottish line-up produced by the award winning Hebridean Celtic Festival and a special Grand Night of Scotland concert will be curated by Donald Shaw, Artistic Director of Celtic Connections, Scotland’s premier winter music festival.

Amy McDonald, Blazin’ Fiddles, Elephant Sessions, Fara and Talisk area mongst the many talented musicians set to perform. Scotland’s emerging talent will also be featured with performances from the TMSA Young Trad Tour and Fèis Rois Ceilidh Trail, and Gaelic language, music and culture is placed firmly at the heart of the festival with sets from Runrig, Capercaillie, Breabach, Hò-rò and Tide Lines, and many more. Pipers, Andrew Frater, Ian Duncan, Isle of Cumbrae Pipe Band and Methil & District Pipe Band will kick off the festival with a parade across the city.

Lisardo Lombardia, Director of Festival Interceltique de Lorient, said: "Scotland is one of the most loyal partners of the festival and a key country at Lorient Interceltic Festival. The Scottish pipe bands have never missed an edition since the beginning in 1971. A lot of talented musicians from the 'Far North' of the Celtic world have been discovered during the almost half a century of festival that followed."

The Scottish focus at Lorient in 2017 was secured by Showcase Scotland Expo, who welcomed Lisardo Lombardia to The Visit in Scotland back in 2015 – a weeklong showcase of trad music to festival directors, agents and bookers from all over the world. Scotland will also host a special pavilion throughout the festival with a free musical programme curated by Showcase Scotland Expo. The Scotland pavilion will be managed by a collective of eleven organisations from across Scotland hoping to boost cultural tourism, showcase the vibrancy, diversity and accessibility of Scotland’s live music scene, develop export opportunities for food and drink companies and foster education and cultural links.

Cabinet Secretary for Culture, Tourism and External Affairs, Fiona Hyslop said: “France and Scotland enjoy deep cultural ties and have a mutual ‘Cultural Statement of Intent’ between our nations, which I signed in 2013. We share a rich Celtic history of storytelling and traditional music and a great love of piping. For Scotland to be chosen as Country of Honour by the Festival Interceltique de Lorient further cements this important relationship. Our prominence at one of the world’s biggest Celtic festivals is an excellent opportunity to showcase the spirit of Scotland, as we celebrate our Year of History, Heritage and Archaeology. Over 200 of Scotland’s finest musicians are performing at this year’s festival – representing emerging young talent and firmly established acts – and are sure to delight existing fans and create new ones. We hope the spotlight on Scotland will entice music lovers to our own plethora of music festivals, which take place across the country throughout the summer months.”

In addition to an exceptional programme of live music, festival-goers will enjoy a special Scottish film programme, including the stunning Scottish documentary feature film, From Scotland With Love by award winning director Virginia Heath and music by King Creosote and Brave the Disney Pixar Oscar-winning animated adventure, inspired by Scotland's raw beauty and rich heritage, by Mark Andrews and Brenda Chapman. The exhibition programme will include work from photography collective Document Scotland, exhibiting the portrait of contemporary Scotland, Scotia Nova, whilst the Battle of Prestonpans Tapestry will be shown in its entirety for the first-time outside Scotland.

Alan Morrison, Head of Music at Creative Scotland, said: “For decades the Festival Interceltique de Lorient has tapped its toes to Scotland’s fiddles, pipes and drums, and so we’re delighted to make this friendship grow even stronger as Country of Honour in 2017. Some of Scotland’s greatest folk and traditional musicians will set the stages alight in Brittany this summer in front of eager French audiences who know how to get a party started. Scotland is proud of its cultural heritage but also excited by the talented new generation of artists who are certain to become the new stars of Lorient. There’s no better way to bring our two countries closer together than to embrace our shared love of music, and this year’s Festival looks like it is going to be very special indeed.”


Founded in 1971, the Lorient Interceltic Festival (LIF) in Brittany, France (4 – 13 August 2017) has attracted some 750,000 festival-goers every summer to celebrate the vibrancy and diversity of contemporary Celtic culture. The LIF is, first and foremost, "a human adventure" designed to encourage cultural exchanges. The largest annual gathering of the Celtic countries (and France’s biggest festival), it has transcended both national and continental borders. Scotland, Wales, Cornwall, the Isle of Man and Ireland from the British Isles; Galicia and Asturias from Spain; the diasporas of Australia and Canada… people from all of these nations make the journey each year to Lorient to celebrate, alongside the people of Brittany, their one unifying culture. Although the Festival is a predominantly musical event with its traditional flagship events such as the Grand Parade of Celtic Nations or the Interceltic Nights, it also features dance, literature, the visual arts, cinema, history, etc.