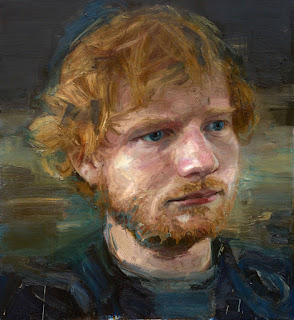 The National Portrait Gallery has acquired a new painted portrait. Of Ed Sheeran...

Painted by the Belfast-based artist Colin Davidson, renowned for his larger-than-life canvases, it is the first painted portrait of Sheeran since the start of his professional career.

The four-foot square portrait, in oil on linen, is the result of an encounter, in which a sitting was proposed, between the artist and the singer’s father, John, an art historian and curator. Sheeran readily agreed and sat for Davidson at his home in Suffolk in August 2015. The final portrait is based on one sitting during which Davidson made twenty drawings from life and took reference photographs.

Davidson studied Sheeran intently for up to three hours which apparently Sheeran found fascinating, as the whole process contrasted to his fast-paced lifestyle.

Colin Davidson said ‘When painting a portrait I am looking for the moment when the person is almost unaware of me being there and I feel I got it with Ed. I deliberately didn’t want Ed to perform and that was odd for him. But there is a youthful aspect to the portrait but also something experienced beyond his years.’

Born in Halifax, West Yorkshire and raised in the market town of Framlingham, Suffolk, singer-songwriter, actor, guitarist and record producer Ed Sheeran is one of the most successful musicians in contemporary British popular culture. His musical style is an eclectic blend of acoustic, pop, folk and hip-hop, which reflects his diverse musical influences from Bob Dylan and Damian Rice to Eminem. His 2011 debut album, + (‘Plus’), reached platinum status six-times in the UK. The album featured the hit single “The A Team”, which received the Ivor Novello Award for Best Song Musically and Lyrically and was nominated for Song of the Year at the 2013 Grammy Awards. Sheeran’s second album x (‘Multiply’) was released in 2014, debuting as number one in both the UK and US charts. In December 2014, Spotify named x the most-streamed album in the world for 2014. The album won British Album of the Year at the 2015 Brit Awards and his single ‘Thinking Out Loud’ earned him two Grammy Awards at the 2016 ceremony. The British singer-songwriter's third album ÷ (Divide), released in March 2017, debuted at No 1 on the Official UK Album Charts with an astonishing 672,000 sales in its opening week and has since made history as the fastest-selling album by a male artist.

Colin Davidson is a leading portrait artist based in Belfast, Northern Ireland, where he was born. He received an Art and Design degree (First Class Hons) from the University of Ulster, Belfast (1987-91) and was awarded an Honorary Degree for Art in 2016 from Queen’s University, Belfast. He has participated in the National Portrait Gallery’s BP Portrait Award three times in 2011-2013, winning the BP Portrait Award Visitor’s Choice Award in 2012. Davidson’s recent portrait series, Silent Testimony, exhibited in 2015 at the Ulster Museum in Belfast, depicted eighteen individuals linked by privately endured experiences of loss that transformed their lives during the Troubles years in Northern Ireland. Seamus Heaney, Brad Pitt, Sir Kenneth Branagh and The Queen are among his many portrait subjects.

Commenting on the larger-than-life format of his portraits Davidson explains: ‘They are all deliberately the same size; the idea is that everyone I paint is an equal and that format allows the face to become something else. If you see a painting of a face that is life-size, it never becomes anything else, it is a head. If it is smaller or bigger it can become something else’. Davidson is represented in the collections of the Smithsonian National Portrait Gallery, Washington DC, the Ulster Museum in Belfast and the National Gallery of Ireland, Dublin.

This portrait is one of two Davidson has painted of Ed Sheeran, the other being in a private collection.

Colin Davidson added ‘It has been a true privilege to get to know Ed and his family. It is my hope that this new portrait offers an alternative insight, one which allows the viewer to glimpse the source of Ed’s unique creativity.’

While this is the first painted portrait of Ed Sheeran to enter the Gallery’s Collection the singer is represented in the Gallery’s Photographs Collection by a C type colour print by Steve Schofield dating from 2011.