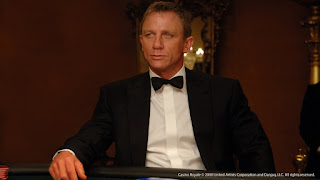 The 21st James Bond film will be accompanied by a live symphonic score for first time ever at The Royal Albert Hall this autumn...

This September, at the Royal (or should that be Royale) Albert Hall, Casino Royale gets the live orchestra treatment with the score performed live by a full symphony orchestra to accompany as special screening of the film as part of the venue’s ‘Films in Concert’ series. This will be the first time an entire Bond score has ever officially been performed live, as the Royal Philharmonic Concert Orchestra play David Arnold’s powerful score in sync with the film on the big screen. David Arnold, who has scored five Bond films, will also discuss his collaboration with the 007 franchise in a pre-concert question and answer session.

Lucy Noble, Artistic Director at the Royal Albert Hall, said: “With the success of our Films in Concert series, we’ve been asked countless times when a Bond film will get the full orchestral treatment. We’re delighted today to announce the first ever Bond-film-in-concert: the 2006 blockbuster, Casino Royale, with David Arnold’s thrilling score performed live. Following the world premieres of Die Another Day, Skyfall and Spectre at the Hall, this promises to be another unforgettable event featuring these two iconic British institutions.”

Grammy and Emmy award-winning composer David Arnold added: “It is a constant privilege to be a part of the James Bond universe. I’ve loved the series since childhood and, more significantly, I’ve loved the music. I couldn’t be more excited to be presenting the score to Casino Royale live to picture. It was a labour of love – as were all my Bond scores – and I’m looking forward to sharing it at this iconic venue.”

Casino Royale, directed by Martin Campbell, is the 21st Bond film in the series, and the first starring Daniel Craig, with an international cast that includes Eva Green, Mads Mikkelsen, Jeffrey Wright and Judi Dench.

Casino Royale in Concert is the first instalment in a brand new James Bond Concert Series, produced by Film Concerts Live!, in association with EON Productions and Metro-Goldwyn-Mayer Studios (MGM).