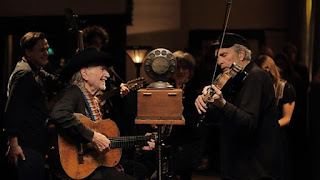 Arena: American Epic, a three-part historic music documentary and The American Epic Sessions feature-length film are both coming to BBC Four this month...

Arena: American Epic is a film series exploring the pivotal recording journeys at the height of the Roaring Twenties, when music scouts, armed with cutting-edge recording technology, captured the breadth of American music and discovered the artists that would shape our world.

The films are the result of a ten-year odyssey undertaken by director Bernard MacMahon and producers Allison McGourty and Duke Erikson, and audio engineer Nicholas Bergh that involved tracking down countless long forgotten musicians, restoring the music that they recorded and reassembling the technology that created it. Along the way they brought some of the most important figures in contemporary culture to help them on their quest. Jack White, T Bone Burnett and Robert Redford have lent their support to what Redford calls "America's greatest untold story”.

Jack White said: “In American Epic we can examine how important the fact is that when phonograph records were invented, for the first time ever, women, minorities, poor rural men and even children were given the opportunity to say whatever they wanted in song, for the whole world to hear, shockingly without much censorship. What they were allowed to say on phonograph recordings, they were not allowed to speak in public or in person. That is an astounding thought."

In the 1920s, as radio took over the pop music business, record companies were forced to leave their studios in major cities in search of new styles and markets. Ranging the mountains, prairies, rural villages, and urban ghettos of America, they discovered a wealth of unexpected talent. The recordings they made of all the ethnic groups of America democratised the nation and gave a voice to everyone. Country singers in the Appalachians, Blues guitarists in the Mississippi Delta, Gospel preachers across the south, Cajun fiddlers in Louisiana, Tejano groups from the Texas Mexico border, and Hawaiian musicians were all recorded. For the first time, a woman picking cotton in Mississippi, a coalminer in Virginia or a tobacco farmer in Tennessee could have their thoughts and feelings heard on records played in living rooms across the country. It was the first time America heard itself.

Virtually no documentation of these extraordinary events survives and nearly ninety percent of the recording masters have been destroyed. A vital part of American cultural history has been lost.

Over three episodes, narrated by Robert Redford, American Epic rescues this history. The remarkable lives of these seminal musicians are revealed through previously unseen film footage and photographs, and exclusive interviews with music pioneers, their families and eyewitnesses to the era.

In the film, which was selected to be shown at SXSW, The American Epic Sessions, the team has reassembled the very first electrical sound recording system from the 1920s, and invited Jack White and T Bone Burnett to produce an album of recordings by twenty of today’s greatest artists in the heart of Hollywood. In a perfect recreation of the conditions of America’s first ever recording sessions, these artists are given the chance to pass through the portal that brought the world into the modern era.

Engineer Nicholas Bergh has reassembled this recording system from original parts and it is now the only one left in the world. The system consists of a single microphone, a towering six-foot amplifier rack, and a live record-cutting lathe, powered by a weight-driven pulley system of clockwork gears. The musicians have roughly three minutes to record their song direct to disc before the weight hits the floor. In the 1920s, they called this “catching lightning in a bottle.” All the musical performances in this film are live. The audio you hear is taken directly from the discs they were recorded to, with no editing or enhancements.