Feature - Barrel Headlong Into The Art 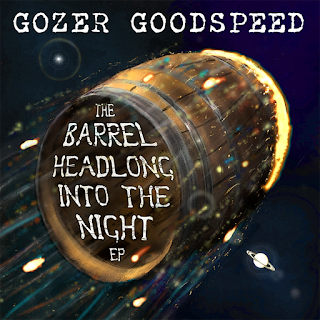 With Gozer Goodspeed’s new EP being released today, Susan Omand (with her Omand Original art beret on) wanted to share her inspiration and thoughts behind creating the artwork for the cover...

Having done the artwork for his first release, The Rattlebone Colour EP, I was really pleased when I got an email from Gozer Goodspeed back in January to say he was planning a new EP and would I like to create the art for it too. It’s always good to get repeat custom, especially from a client I really enjoy working with. The initial brief, apart from knowing the title (but not hearing the music) was to have a barrel floating in front of a stylised outer space backdrop with Saturn “somewhere” in the picture. Well, when it comes to things floating in space, the first port of call for my brain is always The HitchHikers Guide to the Galaxy TV series titles and that unusual viewpoint of the astronaut. 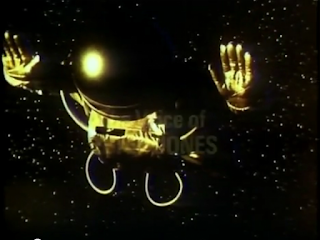 So the first barrel floated along decorously at an unusual angle with nebulous space-clouds of greens and purples and a big yellow-y Saturn adding a bit of background colour to the starry backdrop. It just floated though. It didn’t “barrel” so, working in close consultation with Mr Goodspeed, we decided to add a bit of impetus with movement lines and slight flames where it was bouncing off the atmosphere of an unknown planet. And one thing led to another. The “slight flames” became a bit of an inferno and multicoloured streaks and sparks started flying as we threw everything we could at that barrel, beating it up and burning it down. As the barrel heated up, the background cooled off because the colour there was detracting from the central image, so greens and purples became shades of cool blue and Saturn shifted (don’t tell the astrologers) shrunk (or the astronomers) and lost its yellowness. One final thing was needed to make the barrel “properly space-ish” – taking a tip from the genius of JJ Abrams, we added lens flare. Gotta have lens flare in space! 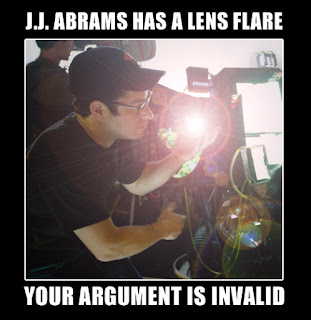 Image sorted, the graphic design came next – selecting, drawing and positioning the writing for the title and name. You may think this is the easy bit, almost an after thought, but far from it. The writing on the barrel itself was a bit of a mental block for me. You see, my grandfather was the Customs & Excise man at Dalmore Whisky Distillery when I was wee so I knew my way around whisky barrels (yes, I can hear you saying I still do) and, for me, writing on barrels had to be blocky and stencilled looking, something Mr G wasn’t keen on, so it took a lot of compromise to come up with writing that we were both happy with. In the end I went with an echo of The Rattlebone Colour EP title writing in shape and peeled and distressed the paintwork. For Gozer Goodspeed’s name I already knew that it had to be in the same typeface as the previous EP but where to put it made a big difference to the flow of the whole cover. We didn’t want it to obscure the barrel or the sparks but it also couldn’t be too small or off centre with nothing to balance it. I ended up shifting the whole image down to give space for the name across the top and then the flow worked with the curves of the barrel and the diagonal created by the positioning of Saturn and the star in the lens flare meaning that the eye always gets pulled round to the name again. And you thought all this was coincidence! 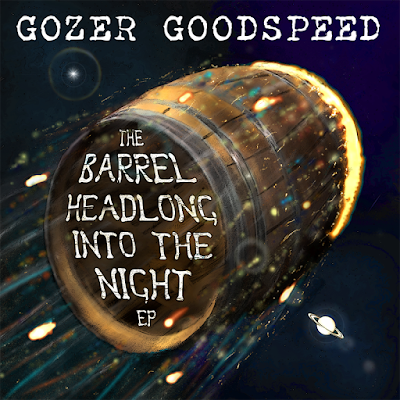 So that’s how the cover of The Barrel Headlong into the Night EP by Gozer Goodspeed came to be. I’d like to say thank you to Mr Goodspeed for his trust in letting me work in my own style with his ideas to produce a cover that, I think, we’re both really happy with. And I can promise you, having now heard the music on The Barrel Headlong into the Night EP, you’re in for a real treat now it's been released. The content is, indeed, brilliant.