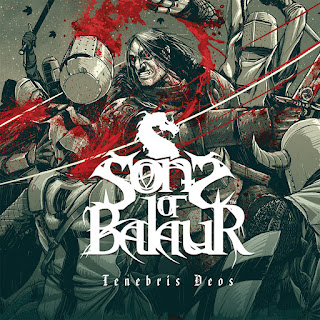 Not content with just doing a DVD review on TheDreamCage.com of the motion comic, Realm of the Damned: Tenebris Deos, our resident Black Metal pisky, Romeo Kennedy also reviewed the album...


Linked with the motion comic Realm of The Damned: Tenebris Deos [see Romeo's review of that HERE - Ed] comes the debut album by fictional Black Metal band the Sons of Balaur. As with the comic itself, Sons of Balaur - Tenebris Deos pays homage to the Black Metal scene but also each track on the album has touches of other subgenres of metal, so you kinda get a Melodic, Death, Black Metal mix of tracks.

Which of course is not a bad mix at all and at times they could be likened to maybe Watain/Vreid meet Steel Panther, especially in the track Succubus Slut.

There are all the tropes. If you will, that make BM/MDM what it is. A healthy use of blast beats and tremolo picking and of course the obligatory swallow-a-bag-of-razorblades growling.

The songs follow the story of Realm of The Damned, so in that sense, it is really a sort of concept album.

Also. Its worth noting that in The Realm of The Damned DVD there is a leaflet which talks about the band's fictional biography and their unholy beginnings.

In some cases a few of the tracks are metal-by-numbers, with all the right beats in the right places, but in its entirety it is actually a really fun metal album with some pretty good tracks. A kind of "If it ain't broke don't fix it" approach to metal.

There are, of course some weaker tracks like Curse of The Bloodlust which I found a little repetitive and a little staid.

The Nameless Roams The Earth is one of the more BM orientated tracks almost like Dimmu Borgir without an orchestra. And even though I'm a fan of a long intro, that one was a little too long.

The track, Van Helsing Must Die is used in a couple of places in the motion comic. A standout thrash piece with a few tremolo BM riffages thrown in for good measures, also listen out for the disembodied chanting, which I really enjoyed.

With that being said, the repetitive chorus of, Van Helsing Must Die does become a little annoying and the track does work better when it is used in certain scenes of the Realm of The Damned motion comic.

I did enjoy the doom metal feel of Balaurs Rise, and I especially enjoyed the track Soldiers of Darkness, which has a really nice simple riff in the verse but the melodic chorus really lifts the track.

Steel Panther-ness aside, Succubus Slut is actually a pretty cool track, albeit with some questionable lyrics, and at times very difficult not to have a cheeky headbang to.

And it has to be said that even some of the weaker tracks all have some moments when you will find yourself headbanging along.

In conclusion, Sons of Balaur -Tenebris Deos, whilst not the most original metal project, is definitely worth a listen, and adds another element to the Realm of The Damned: Tenebris Deos motion comic.

A half-decent fun homage to metal and monsters with some great moments. Sons of Balaur - Tenebris Deos is out now.