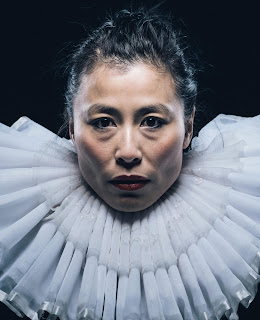 This production, adapted from Marlowe’s ‘Tamburlaine’ by Ng Choon Ping, for the Yellow Earth Theatre company features a small cast. most of whom play multiple parts (and cross-genders a-go-go), with the exception of Lourdes Faberes who plays Tamburlaine.

Faberes is – sorry – fab as the man who rises from shepherd, to rebel to Emperor but ends up raging against the Gods themselves in his determination to conquer the whole world. Interestingly his rise to greatness begins when Cosroe (brother to the weedy Mycetes, King of Persia) forms an alliance with him to bring down Mycetes, which they do. But Tamburlaine is not content with that. And quickly brings down Cosroe.

The play – cut down as it is – then seems to rush through a series of battles and the repeated fall of proud Kings. It’s all a little one note. It’s like Shakespeare but with fewer* notes. There’s little time for us as an audience to take a breath.

Inside this play I think there are deeper themes, about pride and about faith. There’s a fascinating set of scenes around King Sigismund of Hungary and Callapine, heir to the Turkish Empire where both sides swear to their respective religions – Christianity & Islam respectively – but Sigismund breaks the truce to attack. Callapine says that if Christ is there then the Christians will lose because they broke their oath and the dying Sigismund regrets his sin. It’s almost going to be drawn out into a more in-depth discussion when we’re off to the next thing before we have time to take it all in.

Perhaps the original play has more in it. Perhaps not. But I would be interested to see.

Studio 2 at the Arcola Theatre is a small space but they use it well in this production. We’re seated so close to the action that we cannot retreat, which makes two of the most shocking moments in the play gasp inducingly real.

It also means that the music, which is performed live and loud, has a real impact. And you probably don’t want to sit in the seats right next to the musician (whose name I’m afraid I didn’t get but who deserves a round of applause all to herself.)

I can’t, alas, give names to specific parts because there were no programmes but the whole cast do a fine job moving from part to part. Sometimes, like Fiona Hampton who plays both Callopine and Zenocrate (Egyptian Princess and Tamburlaine’s Queen), with a short pause from one line to the next. But the whole cast – Susan Hingley, Melody Brown, Amanda Maud and Leo Wan – who starts us off as the brilliantly bathetic Mycetes – do a fantastic job. As you can see it is a female dominated cast, which makes a pleasant change. Especially with Lourdes Faberes playing Tamburlaine.

It was the first Marlowe play I’ve seen on stage - even in adapted form – so it was interesting to watch, especially with the historical plays of Shakespeare as a comparison.

I enjoyed it, even if it did feel occasionally like it was just one bloody thing after another.

Note: Having now finished it's London run, Taburlaine now goes on a short tour, details below.